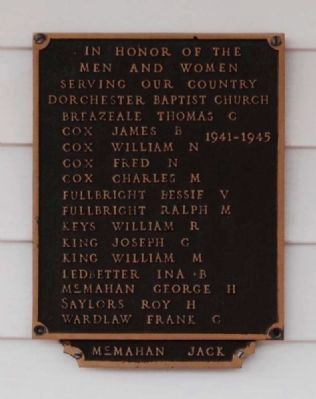 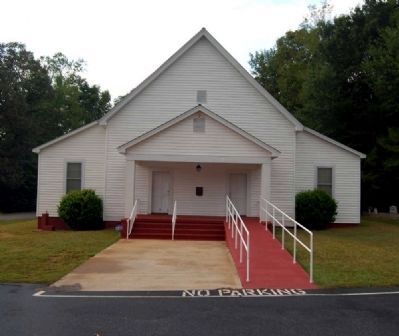 Additional comments.
1. Dorchester Baptist Church
Dorchester Baptist Church was organized May 3, 1832, by about 40 members of the Big Creek, Neals Creek, and Hopewell Baptist Churches. Originally worshipping at the Rock Creek Brush Arbor, the church build a small wooden structure and gathered to worship once a month under the leadership of Rev. Bobby King. Even though most baptisms were held in creeks or rivers during the 19th century, this church was prompted by a great revival held in 1854, in which 40 persons were saved, to build a permanent structure. Water would be carried in large barrels to fill the pool for each baptismal occasion. Eventually filling in and covered over with dirt after the new church building housed an indoor baptismal, the pool was restored and dedicated 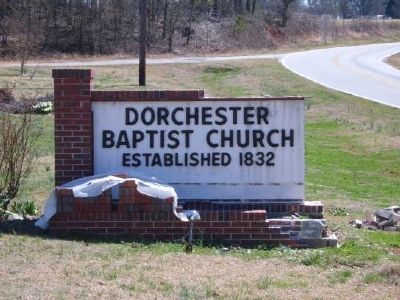 The society in which he was reared was unfavorable to the development of the mental and moral powers of his youthful mind. He enjoyed no advantages, either educational or religious. At the age of eighteen, being disheartened by the dissipation of his father, he determined, without the counsel or permission of his parents, to seek his fortune among strangers, in a strange land. Accord­ingly, in the spring of 1809 he went to Dickson County, Tenn., where, in 1810, he professed religion, joined the Turn Bull Church, and was baptized by Elder Daniel White, of that State. Shortly after his conversion he returned to the land of his nativity, and united with the Neal's Creek Church, in Anderson County, S.C. In March of the succeeding year, he found a companion for life in the person of Miss Fannie Holland, daughter of the Rev. Moses Holland, at that time pastor of Neal's Creek Church. Like many other Christians, he became cold and careless, neglected the house of God, a sure indication of a back-sliding condition, and thus 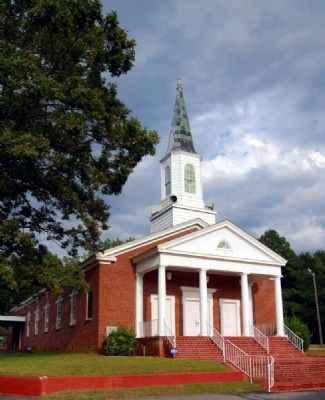 By Brian Scott, October 3, 2010
4. Dorchester Baptist Church
he continued, step by step, to decline until May, 1820. When, in his seventy-ninth year, he was asked by an eminent divine if he did not think he might have been deceived as to his conversion in Tennes­see, he replied: "I do not think I could have been de­ceived, from the fact: If the prodigal son had never been at his father's house he would not have known the way back. I knew I found peace with God through repent­ance and faith in my blessed Jesus when I was in Tennes­see, and, as a backslider, I knew the way to seek and to find him." The minister replied: “This is the best com­ment I ever heard on the parable of the prodigal son."

Soon after his restoration to the church, his purity, humility and Christian deportment began to attract the attention and admiration of all who knew him. Such con­fidence was inspired by his piety, that he was frequently called upon to lead worshipping assemblies in prayer. A heaven-born zeal for the salvation of man now warmed up his soul, and he began to lift up his voice, portraying the wondrous love of Jesus. Uncultured as he was, his appeals were touching, powerful, and, in many instances, irresistible. Impressed with the love of Jesus and the value of souls, he now determined to consecrate himself wholly to the work of the ministry. One great obstacle, however, presented itself--he knew not a letter in the alphabet. But so strong 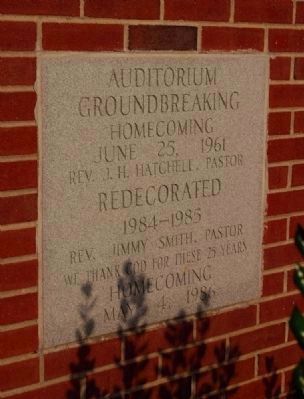 By Brian Scott, October 3, 2010
5. Dorchester Baptist Church Cornerstone
Auditorium Groundbreaking
Homecoming
June 25, 1961
Rev. J.H. Mitchell, Pastor
Redecorated
1984-1985
Rev. Jimmy Smith, Pastor
We thank God for these 25 years.
Homecoming
May 4, 1986
was his desire to preach, that he resolved to overcome this barrier. His wife taught him his letters, to spell and to read. The Bible at once be­came the book for his life-study, and he was emphatically a Bible preacher, drawing from it his faith, doctrines and practice.

On May 24, 1828, he was ordained at the Neal's Creek Church by Elders James Burriss, Arthur Williams, Sanford Vandiver and Moses Holland. He then became pastor of Washington Church, in Greenville County, S.C., which position he held for eight years. In September 1829, he and Elder William McGee were called jointly to the care of Neal's Creek Church, and during the next year they baptized 160 converts. In 1831, by a petition, he moved his membership to Big Creek Church with a view of becoming its pastor. Here he continued nearly seven years, during the first three or four of which his ministerial labors were most signally blessed, the member­ship of the church having been increased from fifty-six to 163.

During his ministry at this church his usefulness was completely jeopardized and the spirituality and progress of the church wholly impaired by an anti-missionary party which controlled the church, but the Lord graciously saved His chosen servant from the influence and the errors of that party, for after this until his death he directed his whole energy and influence to the support of missions 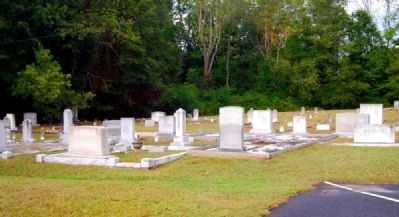 By Brian Scott, October 3, 2010
6. Dorchester Baptist Church Cemetery
and other institutions which had for their end the glory of God and the amelioration of suffering humanity.

The predominance of the anti-missionary spirit in the church and his opposition to it made him many enemies, which rendered it necessary to sever his connection with this church, which took place in August 1838. The loss he sustained in friends by this eruption was great, but God maintained his cause and gave him many strong sup­porters elsewhere.

On May 3, 1832, he assisted in the consti­tution of the Dorchester church, becoming its pastor on the same day, which happy relation existed until 1866, a period of thirty-four years. This was his longest pastorate. In 1833 he assisted in the constitution of the Zion Hill Church, in Greenville County, S.C., and accepted a call to its pastorate, which continued for three years. In March of the same year he also assisted in the organization of Poplar Springs Church (now Long Branch). In 1836 he was called to the care of Hopewell Church, which position he filled for sixteen years to the glory of God and the salvation of man. He accepted a call in 1841 to the Lebanon Church, in which capacity he served till 1845. From 1843 to 1846 he served as pastor of the Poplar Springs Church.

In connection with his pastoral duties, he acted for some years about this time as colporter for the Book De­pository of the Saluda 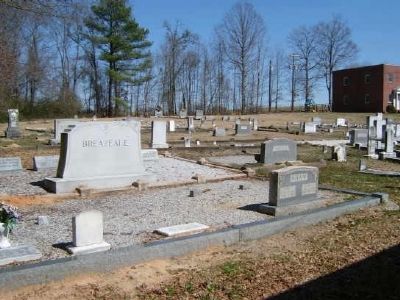 By Brian Scott, January 8, 2003
7. Dorchester Baptist Church Cemetery
Association, distributing large numbers of Bibles, Testaments, tracts and other religious books in the destitute portions of the country. He, also, took several extensive evangelistic, or missionary tours through the mountain region of the State, holding meet­ings and planting churches, in which his labors were wonderfully blessed.

In 1847 he was called to the pastorate of Hepsibah Church, located in the “Fork,” between Seneca and Tugalo rivers, where he labored successfully and acceptably for seven years. He received a call in 1848 to the New Prospect Church, in Anderson county, which he accepted, serving them three years, to the satisfaction and delight of all. In 1852 he assisted in the organization of the church at Whitefield, and on the same day became its pastor, which relation continued until 1872, and as long as he was able to do pastoral work. He assisted in 1850 in con­stituting a church near Earle's Bridge, on Seneca river, known as the Seneca Church, which has since been changed to Mt. Tabor, and at their request preached for them two years. From 1858 to 1862 he served the church at Neal's Creek, and in 1859 he became pastor of the Mt. Bethel Church which position he held for seven years. In 1870 he took charge of the Mt. Tabor Church, and, so far as we know, this was the last call he ever accepted. In the year 1875 he assisted in the constitution 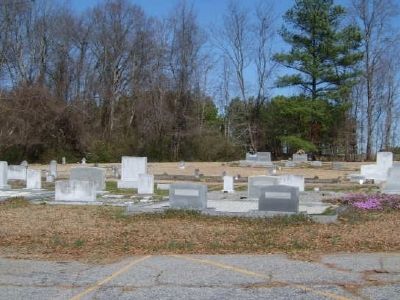 By Brian Scott, January 8, 2003
8. Dorchester Baptist Church Cemetery
of Cedar Grove Church, near Williamston. This was, perhaps, the last official work he ever done.

The whole life of this faithful servant of God was spent in active work for Jesus. From 1828 to 1872 be was never free from the care of churches, much of the time having had the care of as many as four. He traveled extensively in the service of the various churches, which he served as pastor; and was a prominent member for many years of the Saluda Association. As a preacher, he was neither eloquent nor profound, but earnest, fearful, evangelical and persuasive. His ministrations were always acceptable to the people. In the preparation and delivery of his sermons he depended entirely upon the Holy Spirit, hence his preaching was always effective. He never staggered at the promises of God; and was always lively and cheer­ful. His sole object in living and preaching was to win souls to Christ. He ever exhibited in his life the power of Gospel truth, and the preciousness of the hope of sal­vation through Jesus Christ to sustain the Christian in all life's trials, and to infuse the soul with love and joy. Ho was a ma~ of strong mind and gushing emotions, and labored zealously for the cause of the church to which he was strongly attached.

Brother King raised a family of twelve sons and daughters, all of whom were members of the church he so ar­dently loved, and were upright 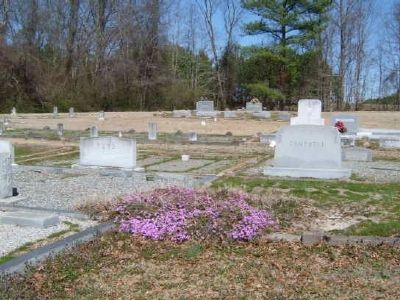 By Brian Scott, January 8, 2003
9. Dorchester Baptist Church Cemetery
and exemplary men and women, making useful and respected citizens in the vari­ous walks of life in which they engaged. It was his happy privilege to see two of his sons ordained to the gospel ministry, both of whom made good and useful preachers.

Having finished his course, he died January 1st, 1879, on his 88th birthday. (Source: A History of the Saluda Baptist Association by T.H. Garrett, 1896. Compiled from a biographical sketch prepared by Elder J.S. Murray, and published in The Baptist Courier.)
— Submitted October 6, 2010, by Brian Scott of Anderson, South Carolina. 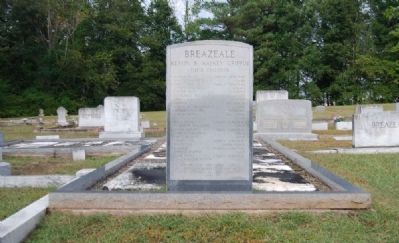 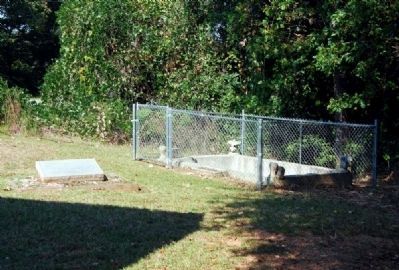 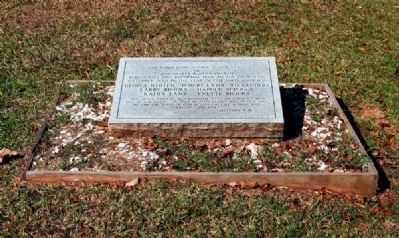 By Brian Scott, October 12, 2010
13. Dorchester Baptist Church Baptismal Marker
The Upper Room Sunday School Class
of
Dorchester Baptist Church
Rededicates this Baptismal Pool to the Church on
September 26th in the Year of Our Lord, 2000 A.D.
George Whiten, Robert Lamb, Ed Sanders
Larry Brooks, Harold Scroggs
Kathy Lamb, Yvette Brooks
"And Jesus, when he was baptized, went up straight away out of the water. At that moment heaven was opened, and he saw the spirit of God descending like a dove and lighting upon him."
Matthew 3:16 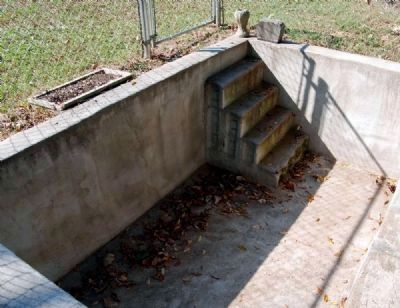 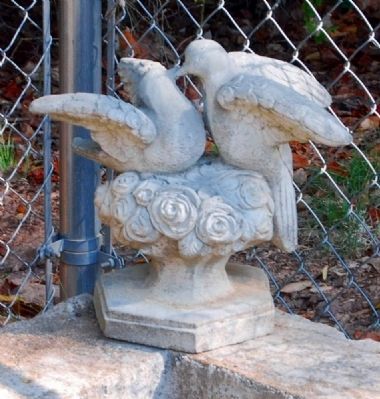 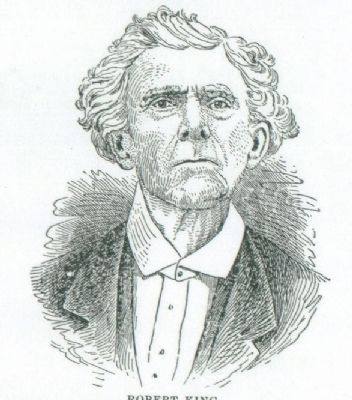 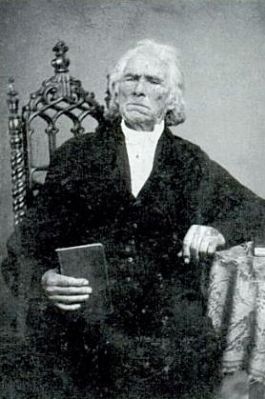