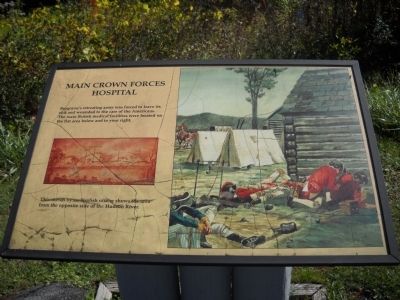 Photographed By Bill Coughlin, October 9, 2010
1. Main Crown Forces Hospital Marker
Inscription.
Main Crown Forces Hospital. . Burgoyne’s retreating army was forces to leave its sick and wounded to the care of the Americans. The main British medical facilities were located on the flat area below and to your right. . This historical marker was erected by National Park Service. It is in Stillwater in Saratoga County New York

Burgoyne’s retreating army was forces to leave its sick and wounded to the care of the Americans. The main British medical facilities were located on the flat area below and to your right.

Location. 43° 0.083′ N, 73° 36.543′ W. Marker is in Stillwater, New York, in Saratoga County. Marker can be reached from Park Tour Road, on the right when traveling west. Marker is in Saratoga National Historic Park, on a walking trail that begins at the Fraser Burial Site stop on the auto tour road. Touch for map. Marker is in this post office area: Stillwater NY 12170, United States of America. Touch for directions. 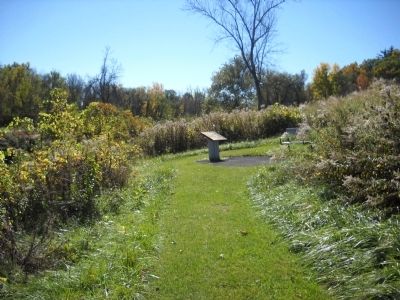 Photographed By Bill Coughlin, October 9, 2010
2. Marker on the Saratoga Battlefield

Click or scan to see
this page online
(approx. 0.2 miles away); Surviving Portion of Champlain Canal (approx. ¼ mile away); Site of the Taylor Cabin (approx. 0.3 miles away). Touch for a list and map of all markers in Stillwater.

More about this marker. The right side of the marker contains a picture of wounded British soldiers being treated at the hospital site. The left of the marker features a picture of a landscape and indicates the positions of the marker, the Hospital, Artillery Park and Baggage Park. It has a caption of “This sketch by an English officer shows the area from the opposite side of the Hudson River.”

3. The Battle of Saratoga 1777. A British perspective of the Battles of Saratoga from BritishBattles.com. (Submitted on October 10, 2010, by Bill Coughlin of Woodland Park, New Jersey.) 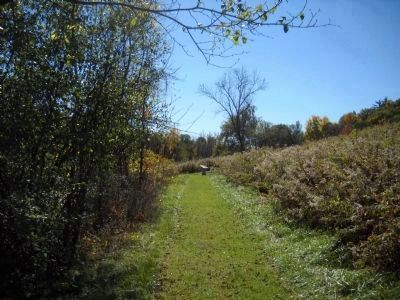