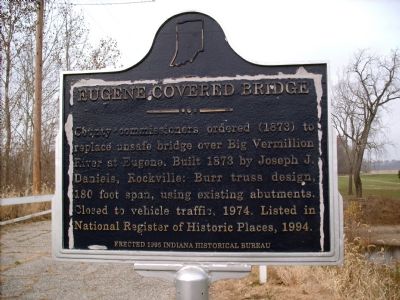 Topics and series. This historical marker is listed in these topic lists: Bridges & Viaducts • Notable Buildings. In addition, it is included in the Covered Bridges 🌉, and the Indiana Historical Bureau Markers series lists.

Location. 39° 58.117′ N, 87° 28.394′ W. Marker is near Eugene, Indiana, in Vermillion County. Marker can be reached from North Main Street. Follow North Main Street from Cayuga through the Village of Eugene. At Eugene's north end is the Covered Bridge Restaurant. The bridge is behind the restauraunt. Touch for map. Marker is at or near this postal address: 5787 North Main Street, Cayuga IN 47928, United States of America. Touch for directions.

Other nearby markers. At least 8 other markers are within 7 miles of this marker, measured 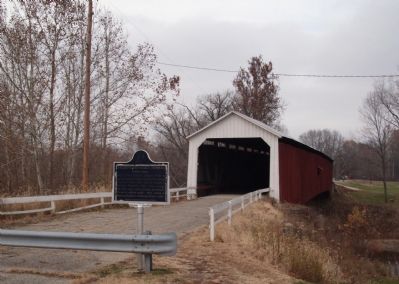