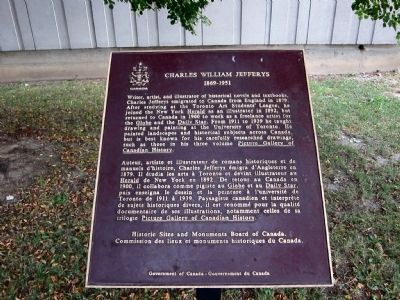 {Marker Text in English:}
Writer, artist, and illustrator of historical novels and textbooks, Charles Jefferys emigrated to Canada from England in 1879. After studying at the Toronto Art Students League, he joined the New York Herald as an illustrator in 1892, but returned to Canada in 1900 to work as a freelance artist for the Globe and the Daily Star. From 1911 to 1939 he taught drawing and painting at the University of Toronto. He painted landscapes and historical subjects across Canada, but is best known for his carefully researched drawings, such as those in his three volume Picture Gallery of Canadian History. 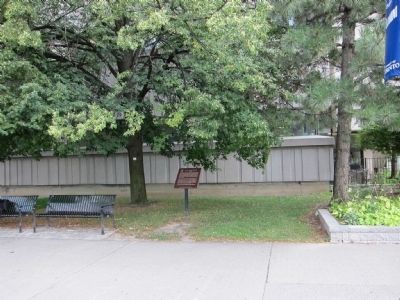 Topics. This historical marker is listed in this topic list: Arts, Letters, Music. A significant historical year for this entry is 1879.

More about this marker. The marker is mounted on a low pole between the trees, just to the west (i.e. "right") of a couple of benches at the west end of the Medical Sciences Building on the University of Toronto campus.