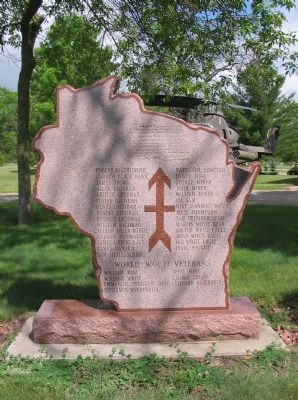 The thanks of the Nation is extended through the President, Commander in Chief of the Army and Navy of the United States to the people of The Winnebago Tribe in Wisconsin for their unswerving loyalty and patriotism, the splendid service rendered, the willing sacrifices made, and the bravery of their sons in the military and naval service of the United States when the Nation was in peril during the World War of 1917-1918.
July 4, 1924
Calvin Coolidge 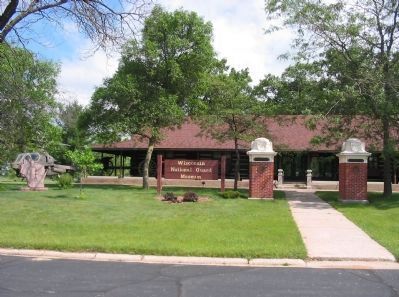 Photographed By Keith L, June 6, 2010
2. Wisconsin National Guard Museum
The monument is at the left side of the photo.

Topics and series. This historical marker and monument is listed in these topic lists: War, World I • War, World II. In addition, it is included in the Former U.S. Presidents: #30 Calvin Coolidge series list. A significant historical month for this entry is July 1910.

Location. 43° 55.621′ N, 90° 15.815′ W. Marker is near Camp Douglas, Wisconsin, in Juneau County. Marker can be reached from County Highway C north of Interstate 90/94, on the left when traveling north. Marker is located at the Wisconsin National Guard Museum inside Volk Field / Camp Williams military base; beyond the security checkpoint, on Independence Drive, 0.1 mile west of Wisconsin Avenue. Touch for map. Marker is at or near this postal address: 100 Independence Drive, Camp Douglas WI 54618, United States of America. Touch for directions. 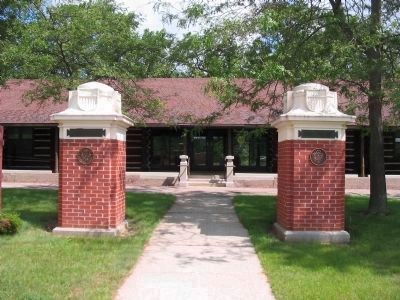 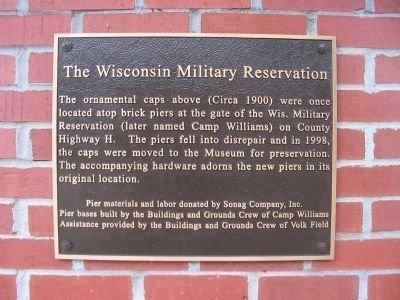 Photographed By Keith L, June 6, 2010
4. Plaque on Back of Brick Pier
The Wisconsin Military Reservation
The ornamental caps above (Circa 1900) were once located atop brick piers at the gate of the Wis. Military Reservation (later named Camp Williams) on County Highway H. The piers fell into disrepair and in 1998, the caps were moved to the Museum for preservation. The accompanying hardware adorns the new piers in its original location.
Pier materials and labor donated by Sonag Company, Inc. Pier bases built by the Buildings and Grounds Crew of Camp Williams. Assistance provided by the Building and Grounds Crew of Volk Field. 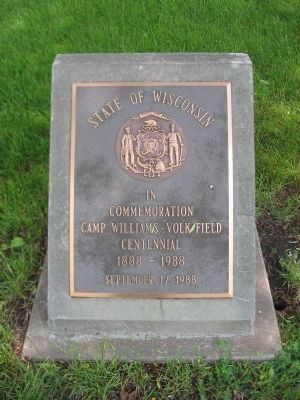