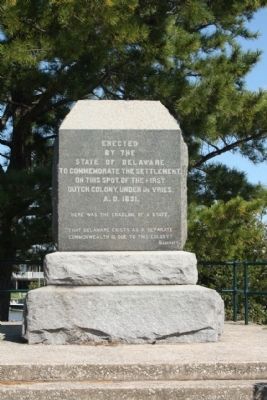 Erected
By The
State of Delaware
To Commemorate The Settlement
On This Spot, Of The First
Dutch Colony, Under De Vries,
A.D. 1631.

Here was the cradling of a state.
"That Delaware exists as a separate
Commonwealth is due to this colony !"
Bancroft

Topics. This historical marker and monument is listed in this topic list: Landmarks. A significant historical year for this entry is 1631.

Other nearby markers. At least 8 other markers are within one mile of this marker, measured as the crow flies. The De Vries Monument (here, next to this marker); University of Delaware (about 600 feet away, measured in a direct line); Home of Major Henry Fisher (approx. 0.2 miles away); Tapping the Power of Wind Energy in Coastal Delaware (approx. 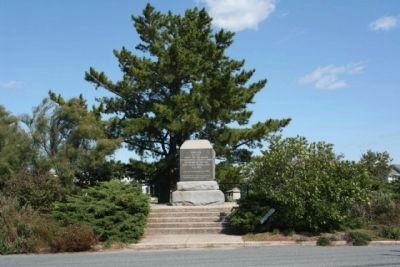 Regarding deVries Monument. In 1631 on this site, 28 Dutch settlers under the direction of deVries established the whaling colony of Zwaanendael and erected a fort. The following spring, Indians burned the stockade and massacred the settlers. Although the ill-fated settlement endured only briefly, its existence was significant in Delaware's becoming a separate State The Monument honoring the significance of the settlement was erected in the center of what was once the North bastion of the fort (apparently by coincidence). In 1964 members of the Sussex Society of Archaeology and History found the postmold patterns of the South bastion as sketched by deVries. This discovery culminated several years of effort to determine the exact location of the fort.