“The Memorial Church of Washington Irving” 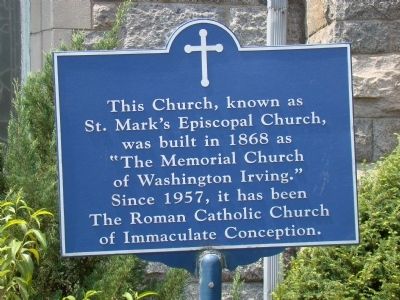 Photographed By J. J. Prats, August 9, 2010
1. St. Mark’s Episcopal Church Marker
Inscription.
“The Memorial Church of Washington Irving”. . , This Church, known as St. Mark’s Episcopal Church, was built in 1868 as “The Memorial Church of Washington Irving.” , Since 1957, it has been The Roman Catholic Church of Immaculate Conception. . This historical marker is in Tarrytown in Westchester County New York

This Church, known as St. Mark’s Episcopal Church, was built in 1868 as “The Memorial Church of Washington Irving.”

Since 1957, it has been The Roman Catholic Church of Immaculate Conception.

Topics. This historical marker is listed in this topic list: Churches & Religion. A significant historical year for this entry is 1868.

Location. 41° 4.956′ N, 73° 51.522′ W. Marker is in Tarrytown, New York, in Westchester County. Marker is at the intersection of North Broadway (U.S. 9) and College Avenue, on the left when traveling north on North Broadway. It is next to Patriot Park and across the street from Sleepy Hollow Middle School. Touch for map. Marker is in this post office area: Tarrytown NY 10591, United States of America. Touch for directions. 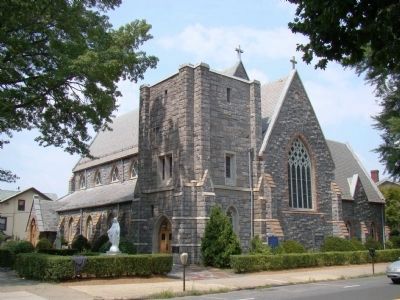 Photographed By J. J. Prats, August 9, 2010
2. The Memorial Church of Washington Irving
Marker faces the sidewalk to the right of the main entrance. From the 1866 New York Times article: “The church is to be 100 feet in length, 50 feet in width, and will be in the Gothic Style of architecture. A fine marble statue of Irving will be placed in the vestibule of the building. The material used in the construction of the edifice will be blue Westchester granite.”

Also see . . .  Laying of the Corner-Stone of the Memorial Church of Washington Irving. New York Times article, July 6, 1866:
“Influenced by their contiguity to these points of interest to all the readers of [Washington Irving] as well as by the fact that no fitting testimonial to his memory has, as yet, been erected amid these now familiar scenes, the wardens and vestry of St. Mark’s Church have determined to set apart their new edifice ... as his memorial. In pursuance of this plan, they have purchased an eligible lot of land, situated on Broadway, the principal avenue of the village of Tarrytown, only fifty yards from the spot where Major Andre was captured, and where the ‘strange rider’ first appeared to the village schoolmaster; and are about to put thereon a beautiful structure of stone, to be known as the Memorial Church of Washingon Irving.” (Submitted on October 31, 2010.) 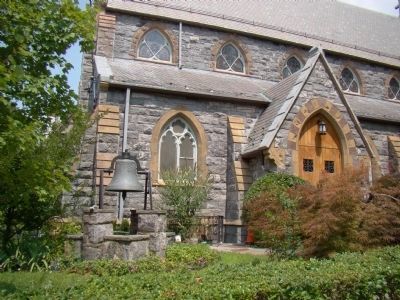 Photographed By J. J. Prats, August 9, 2010
3. Portion of College Street Façade
The bell is the 1929 bell from the previous Catholic church building. 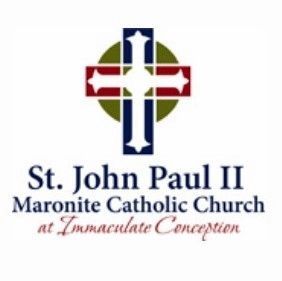 Editor’s want-list for this marker. Photos of the interior of the church • Can you help?
Share this page.