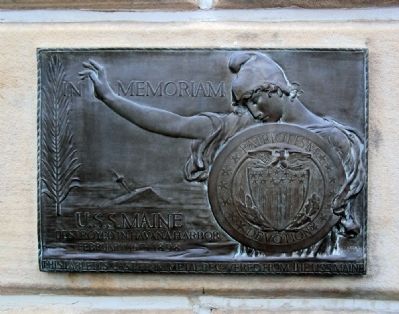 By Jamie Abel, October 31, 2010
1. U.S.S. Maine Marker
Inscription.
U.S.S. Maine. In Memoriam.
In Memoriam U.S.S. Main Destroyed in Havana Harbor February 15th 1898 This tablet is cast from metal recovered from the USS Maine. . This historical marker was erected in 1913 by Stanton Monument Association. It is in Steubenville in Jefferson County Ohio

In Memoriam
U.S.S. Main
Destroyed in Havana Harbor
February 15th 1898
This tablet is cast from metal recovered from the USS Maine

Topics and series. This historical marker is listed in this topic list: War, Spanish-American. In addition, it is included in the U.S.S. Maine Memorial Plaques series list. 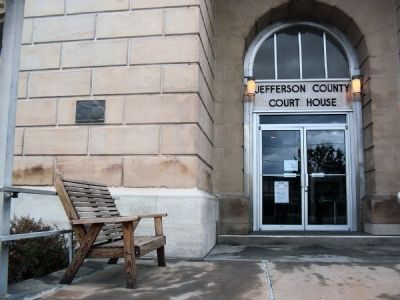 Additional comments.
1. The presentation of the tablet...
A Three Wars Celebration was held in Steubenville to honor Revolutionary War, Civil War and Spanish-American War soldiers. The Stanton Monument Association, originally formed to erect a statue of Lincoln War Secretary and Steubenville native Edwin Stanton (completed in 1911), organized the three-day 1913 extravaganza. The metal from the tablet was formed from the metal of the bronze and brass cannon aboard the U.S.S. Main. An electric helm indicator, bronze port covers and ornamental tripod were also presented to the city museum.
— Submitted November 2, 2010, by Jamie Abel of Westerville, Ohio. 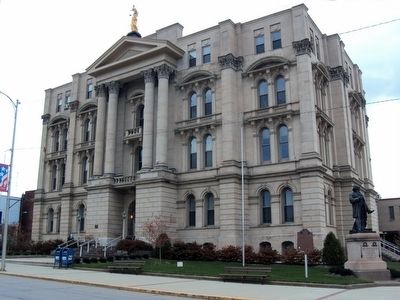