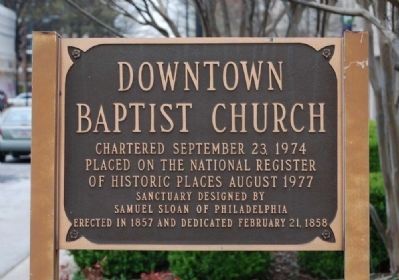 Chartered September 23, 1974
Placed on the National Register
of Historic Places August 1977
Sanctuary designed by
Samuel Sloan of Philadelphia
Erected in 1857 and Dedicated February 21, 1858 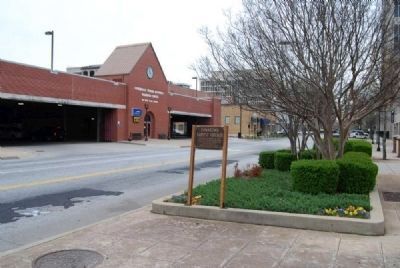 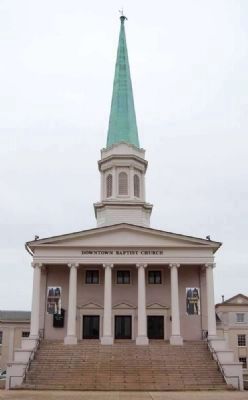 4. Samuel Sloan. Samuel Sloan (1815 – 1884 in Raleigh, North Carolina) was a leading Philadelphia-based architect and writer of architecture books in the mid-19th century. (Submitted on April 3, 2009, by Brian Scott of Anderson, South Carolina.)

In 1851, Furman University, a Baptist denominational school, was established in Greenville, strengthening the church, as well as making new demands upon it. In 1852 James C. Furman, later president of the school and son of Richard Furman for whom it was named, wrote: "I wish 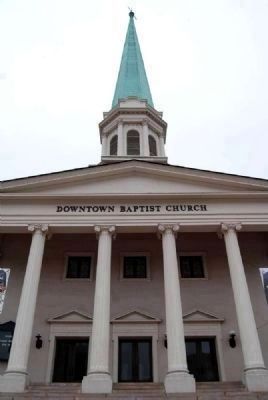 By Brian Scott, March 31, 2009
4. Downtown Baptist Church
the Baptists of the state would show the same wisdom which the Episcopalians of the low country do in putting up attractive buildings in important places in the up country...Our building which is larger than theirs scarcely contains our congregation. We have had to put down a double row of chairs on the aisles. In my means were such as to allow be subscribing liberally, I would urge upon our people the erection of another building."

In 1854, a building committee was formed to study the possibility of a new church. The prominent architect Samuel Sloan was employed, and in 1858 the present structure was completed.

In the years that followed, Downtown Baptist Church grew steadily. In 1882, the church hosted the Southern Baptist Convention, and by 1889 it had held eight sessions of the State Convention. in 1890, the name of the church was changed from Greenville Baptist to First Baptist Church.

During the 20th Century the church continued to grow, and by 1956 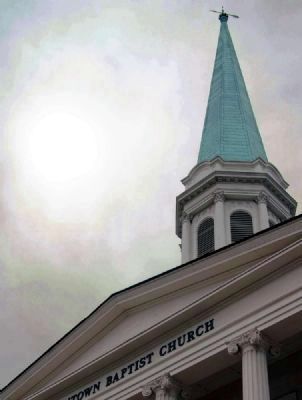 Set upon a high raised basement, Downtown Baptist Church features six Ionic columns supporting a pediment and tall central spire. It is constructed of brick covered with stucco. Numerous concrete steps lead to the portico which has three double glass entrance doors, each capped by a pediment. Above each entrance way is a window with vertical mullion. On the basement level there are 8/8 windows and an entrance way (all of which are parallel to the main floor window).

Alterations were made on all three of these facades ca. 1915. As 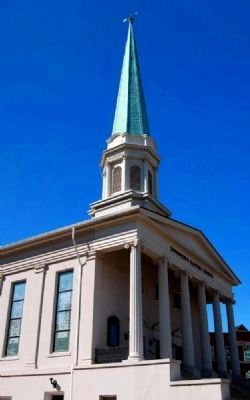 By Brian Scott, March 4, 2010
6. Downtown Baptist Church
shown by the architect's drawing and an early photograph, there was originally one front door, while the side windows were probably shuttered and included sixteen lights per sash. The stairway has also been widened one bay on each side.

Ca. 1914 a Sunday School building was added to the rear of the church. In 1940 this building was remodeled and an auxiliary building was erected. In 1950 a three story structure was added. In 1956 church growth again required new educational facilities, and construction began on another addition which was completed ca. 1957.

Interior: The interior features a central row of pews with one smaller row on each side. Balconies featuring recessed panels and supported by metal columns extend along the side and rear.

The basic plan of the interior has been maintained with the exception of changes made in 1915. At that time the sanctuary was enlarged approximately seventeen feet, the floor was made to slope, and the original two rows of pews were replaced by three. The pulpit area was changed and enlarged with the addition of an organ lost and choir gallery. During this remodeling the original perspective-painted architectural features (including Corinthian columns and stenciled cornice) were removed. Nevertheless, despite these alterations, the basic design of the decorative elements was maintained. 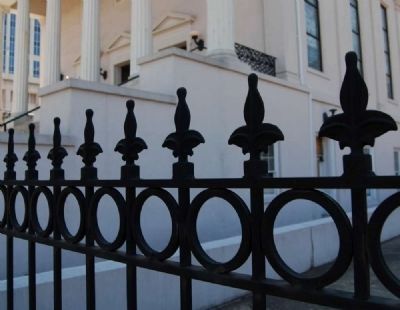 By Brian Scott, March 4, 2010
7. Iron Fence Surrounding Downtown Baptist Church
Designer of the church was Samuel Sloan (1815-1884), who, according to the Dictionary of American Architects, was "one of the most distinguished of early American architects..."