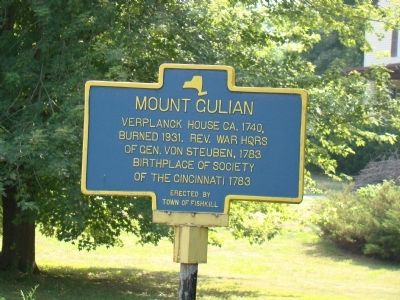 Erected by Town of Fishkill.

Topics. This historical marker is listed in these topic lists: Fraternal or Sororal Organizations • War, US Revolutionary. A significant historical year for this entry is 1740.

Location. 41° 31.317′ N, 73° 58.44′ W. Marker is near Fishkill, New York, in Dutchess County. Marker is at the intersection of New York State Route 9D and Hudson View Drive, on the left when traveling north on State Route 9D. Touch for map. Marker is in this post office area: Fishkill NY 12524, United States of America. Touch for directions. 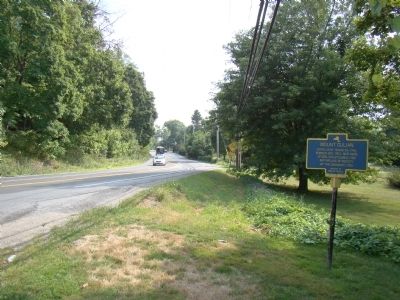 Click or scan to see
this page online
Mount Gulian Historic Site is at the end of Lamplight Street, the first left after entering the residential neighborhood on Hudson View Drive.

Also see . . .
1. The Verplanck Family. Mount Gulian Historic Site website entry:>br> “Around 1730, a colonial-style fieldstone house was built at Fishkill Landing on the Rombout Patent land. This rough frontier home was gradually surrounded by a working plantation, a dock on the Hudson that facilitated the New York-Kingston-Albany trade and many service buildings for servants and crop production. This homestead was called “Mount Gulian”, and it was used as a summer retreat for the [Verplanck] family and a working plantation, but it is not believed that any family members lived at the site year round until the early 1800’s.” (Submitted on November 7, 2010.)

2. Patriot General Von Steuben. Mount Gulian Historic Site website entry:
“After Yorktown, Washington still expected renewed attacks by British forces against the Hudson Valley so he had Von Steuben move his headquarters to New York. He joined General Knox at Vail’s Gate, near West Point, in the fall of 1782. He then moved to Mount Gulian in Fishkill, opposite Washington’s headquarters at Newburgh in early 1783. Throughout this time Von Steuben was busy with the design and building of the huge New Windsor Cantonment, which eventually had 8000 soldiers and dependants living in 700 cabins. As peace negotiations 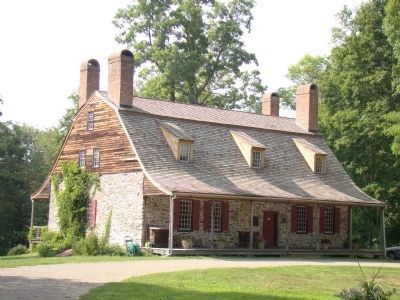 Photographed By J. J. Prats, August 10, 2010
3. Mount Gulian Homestead
dragged on into the spring, at Mount Gulian with Von Steuben presiding on May 13, 1783, the Society of the Cincinnati was formed as America’s first veterans’ fraternal organization. With news of the Peace Treaty of Paris, Von Steuben furloughed and then discharged his troops by June of 1783. In March 1784, General Baron Von Steuben was discharged from the Continental Army with honors.” (Submitted on November 7, 2010.)

3. The Society of the Cincinnati. Mount Gulian Historic Site website entry:
“The Society of the Cincinnati was organized on May 13, 1783, at Mount Gulian, in Fishkill, New York, by Continental officers who fought in the American Revolution, including patriot General Baron Von Steuben, whose headquarters was located at Mount Gulian. The Society was the first veterans’ fraternal organization established in the United States. The Society’s original purpose was to facilitate fellowship, friendship and recognition for officer war veterans of the Continental Army. At a time when there were no “veterans benefits” the Society was also created to act as an “insurance policy” of sorts, an institution that collected funds from every member and which would remit benefits to their fellow officers in time of need. The Society also acted as a powerful organization which would lobby Congress for the back-pay and land grants promised to veteran officers of the War. George Washington was the Society’s President General from 1783 until his death in 1799.” (Submitted on November 7, 2010.)
Credits. This page was last revised on August 15, 2021. It was originally submitted on November 7, 2010, by J. J. Prats of Powell, Ohio. This page has been viewed 827 times since then and 18 times this year. Photos:   1, 2, 3. submitted on November 7, 2010, by J. J. Prats of Powell, Ohio.
Share this page.