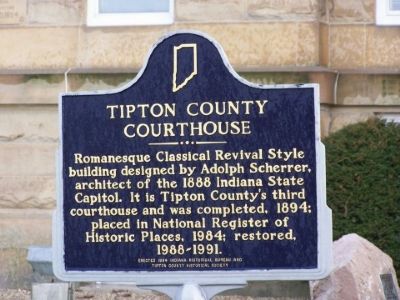 Topics and series. This historical marker is listed in this topic list: Notable Buildings. In addition, it is included in the Indiana Historical Bureau Markers series list. A significant historical year for this entry is 1888.

Other nearby markers. At least 8 other markers are within 8 miles of this marker, measured as the crow flies. Tipton County (Indiana) Veterans Memorial (a few steps from this marker); General John Tipton (a few steps 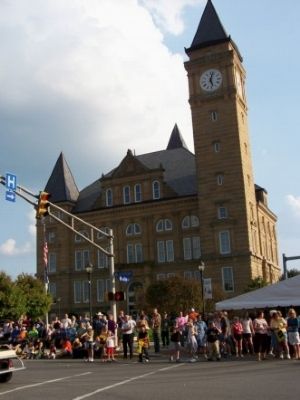 Click or scan to see
this page online
from this marker); Land Between The Rivers (a few steps from this marker); a different marker also named Tipton County (Indiana) Veterans Memorial (approx. half a mile away); New Purchase Boundary (Treaty of St. Mary's) (approx. half a mile away); Tipton County (Indiana) World War I and II Memorial (approx. ¾ mile away); Ryan White (1971-1990) (approx. 7.3 miles away); Roberts Settlement (approx. 7.4 miles away). Touch for a list and map of all markers in Tipton.