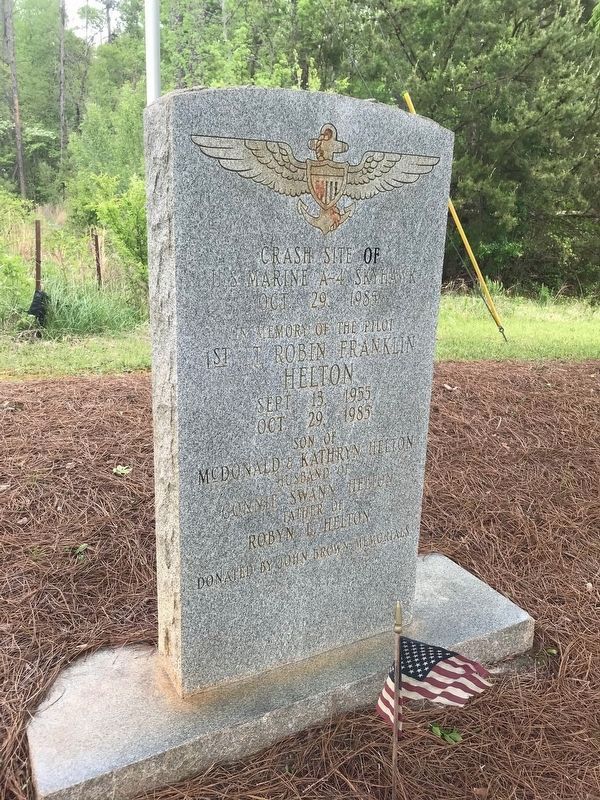 Topics. This historical marker is listed in this topic list: Military. A significant historical month for this entry is September 1892. 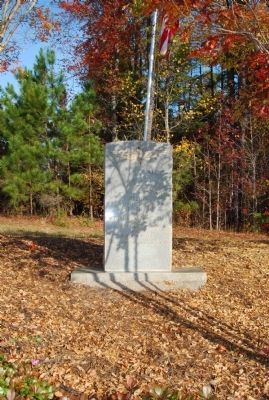 Robin Franklin Helton was dedicated to serving his country. He enlisted in the U.S. Air Force at an early age and served in several places including Korea. He was honorably discharged and went to college. When the West Virginia native graduated from Marshall University, he enlisted in the U.S. Marines to become an officer and a pilot.

1st Lt. Helton was flying his A-4 Skyhawk jet over Spartanburg County on October 29, 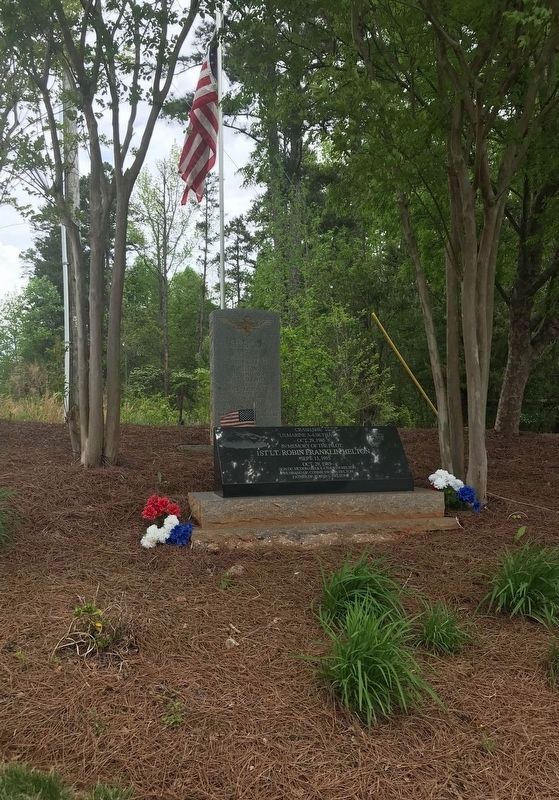 Photographed By James Stickley, April 18, 2019
3. Robin Helton Marker
1985, when he lost oxygen. It may have been because of a faulty hose in the oxygen/communications system of the aircraft.

The Navy knew the hose had a history of failures, but it killed a plan to replace the system a year earlier because it would cost more than $2 million.

The 30-year-old Marine pilot lost consciousness and crashed into the woods outside Boiling Springs. He left behind his young wife and baby daughter, his parents and other family members.

The community where he crashed made sure they would never mourn alone.

From the beginning, the people of Boiling Springs have embraced the Helton family and kept the memory of Robin Helton’s service and sacrifice alive. It’s a record for which the community should be proud.

In the first six months after Helton’s crash, his family received more than 1,500 cards and letters from Spartanburg County residents. They even received a package with two dresses for the baby. “We can’t believe that people who don’t know you can care as much as the people here have shown they do,” Helton’s sister said at the time.

The community erected a monument to Helton at the crash site and invited his family to the dedication. “The people here are unbelievable. They didn’t know him, but it is as if they did,” Helton’s widow, Connie, said at the time. 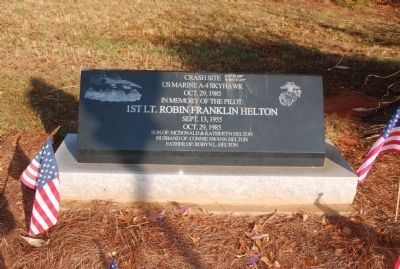 Photographed By Michael Sean Nix, November 18, 2010
4. Robin Helton Marker (2010)
New marker next to the older one. The information is mostly the same.
was struck by vandals more than once. The community repaired it. When the remote area of the crash became a subdivision, a street was named in Helton’s honor. A few years ago, a memorial service was held on the 21st anniversary of the crash.

Last week, a new memorial was dedicated to Robin Helton, one that should be less prone to damage. His family was here to renew their acquaintance with Spartanburg County residents.

His family should be proud of 1st Lt. Helton, his service, his sacrifice and his legacy.