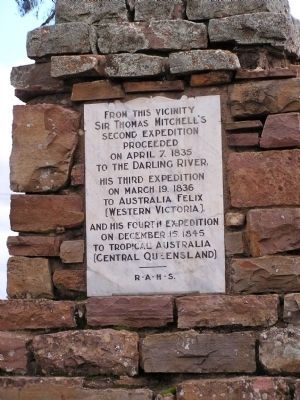 From this vicinity Sir Thomas Mitchell's second expedition proceeded on April 7, 1835 to the Darling River, his third expedition on March 19, 1836 to Australia Felix (Western Victoria), and his fourth expedition on December 15, 1845 to Tropical Australia (Central Queensland). R.A.H.S.

Topics. This historical marker is listed in this topic list: Exploration. A significant historical month for this entry is March 1894.

Location. 33° 14.7′ S, 148° 48.833′ E. Marker is near Boree, New South Wales, in Cabonne Shire Council. Marker is at the intersection of The Escort Way (Highway 81) and Orange Road (Highway 90), on the right when traveling west on The Escort Way. About 30 km west of Orange along The Escort Way just after the settlement of Boree or 10 km east of Cudal beofre you reach Boree. Touch for map. Marker is in this post office area: Boree NSW 2800, Australia. Touch for directions. 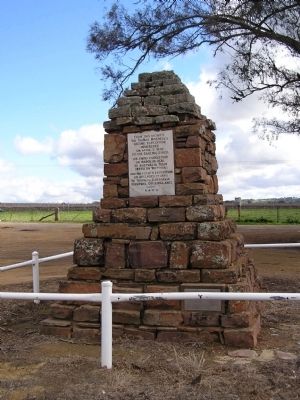