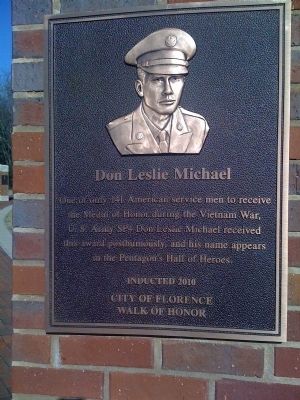 One of only 141 American service men to receive the Medal of Honor during the Vietnam War, U.S. Army SP4 Don Leslie Michael Received this award posthumously, and his name appears in the Pentagon's Hall of Heroes.

Topics and series. This historical marker is listed in this topic list: War, Vietnam. In addition, it is included in the Medal of Honor Recipients series list.

Location. 34° 48.395′ N, 87° 37.884′ W. Marker is in Florence, Alabama, in Lauderdale County. Marker can be reached from Hightower Place south of Veterans Drive (Alabama Route 133), on the left when traveling south. Located in River Heritage Park. Touch for map. Marker is in this post office area: Florence AL 35630, United States of America. Touch for directions.

Related marker. Click here for another marker that is related to this marker. Another Don Leslie Michael Marker.