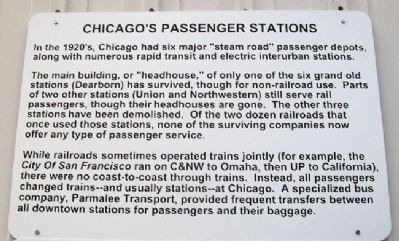 In the 1920's, Chicago had six major "steam road" passenger depots, along with numerous rapid transit and electric interurban stations.

The main building, or "headhouse," of only one of the six grand old stations (Dearborn) has survived, though for non-railroad use. Parts of two other stations (Union and Northwestern) still serve rail passengers, though their headhouses are gone. The other three stations have been demolished. Of the two dozen railroads that once used those stations, none of the surviving companies now offer any type of passenger service.

While railroads sometimes operated trains jointly (for example, the City of San Franciso ran on C&NW to Omaha, then UP to California), there were no coast-to-coast through trains. Instead, all passengers changed trains -- and usually stations -- at Chicago. A specialized bus company, Parmalee Transport, provided frequent transfers between all downtown stations for passenger and their baggage.

Union Station -- Adams & Canal
Of the major terminals from the Golden Age, only Union Station 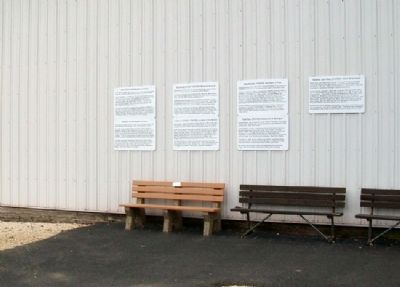 The classic white marble buildings, based on a Daniel Burnham design and opened in 1925, originally covered two city blocks. The headhouse was demolished in 1969 and replaced by an office tower; however, the restored main waiting room (with office floors above) and the underground passenger concourse remain in use by Amtrak and Metra. All tracks at Union Station are below street level, entering from both the North and South; three tracks run through both sides.

Earlier terminals had been located near the site of the Merchandise Mart. The new station, with a classic design featuring six enormous Doric columns at the entryway, opened in 1911. 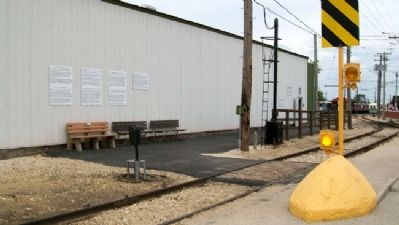 The station's headhouse was closed in 1984 and replaced with a modern office skyscraper, but the elevated station tracks and (until the late 1990's) the original trainshed remained in use. Those tracks continue to serve Metra's ex-C&NW commuter lines, accessed through what is now the Richard B. Ogilvie Transportation Center.

LaSalle Street Station served as the primary terminal for the Chicago, Rock Island & Pacific's commuter lines and intercity trains to Peoria, Kansas City, Iowa, Denver, and connections to Los Angeles. Other tenants included New York Central, with trains to Cleveland, Detroit, Buffalo, Boston, and New York, and the Nickel Plate (formally, the New York, Chicago & St. Louis), with service to Buffalo and through trains to other East Coast destinations via the Lackawanna. 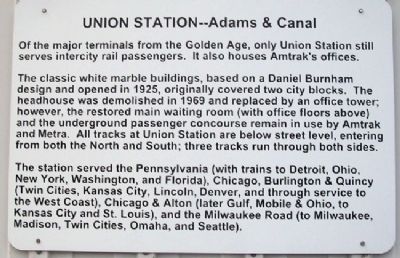 Photographed By William Fischer, Jr., September 6, 2010
4. Chicago's Union Station Marker
massive single-arch trainshed lasted only until 1934, when it was replaced by two smaller spans. The entire structure was demolished in 1981, and new facilities were constructed directly to the south to serve Metra's Rock Island commuter operations.

Opened in 1885, the station served more railroads than any other in Chicago. The largest tenant was Santa Fe, with elegant trains to the Southwest and California. Other tenants included Wabash (to Decatur and St. Louis, plus commuter service to Orland Park), Erie (New York City), Grand Trunk Western (Toronto and Montreal), Chicago & Eastern Illinois (St. Louis and Evansville, with through service to Nashville, New Orleans, Atlanta, and Miami), Monon (Indianapolis and Louisville), and Chesapeake & Ohio (Washington).

Dearborn Station is the only one of Chicago's station headhouse structures to survive; it now houses a shopping mall. The area behind the headhouse, once filled by a trainshed and trackage, holds he first major housing development in the booming South Loop district. 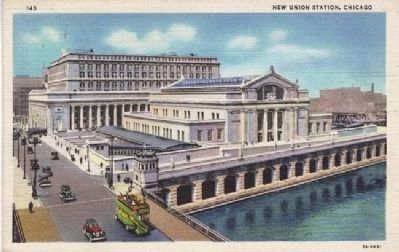 Photographed By Unknown
5. Chicago's Union Station Postcard
& Michigan
Central Station was perhaps the most visible of Chicago's six grand "steam road" stations, with a large clock tower and trainshed on the southeastern edge of the Loop.

Completed in 1893, Central Station was built on reclaimed land at what was then the shoreline of Lake Michigan. Additional landfill east of the Illinois Central tracks later created Grant Park.

The station was closed in 1972, and demolished two years later. Today, new housing fills much of the station and yard areas. 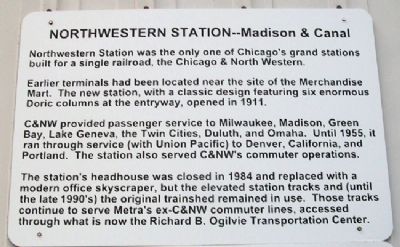 Despite the rush to demolish the station, the site of the headhouse is still vacant more than three decades later. The River City residential development now stands on the former yard area just to the south.

Topics and series. This historical marker is listed in this topic list: Railroads & Streetcars. In addition, it is included in the Chicago Rock Island & Pacific Railway series list. A significant historical year for this entry is 1925.

Other nearby markers. At least 8 other markers are within walking distance of this marker. The Burlington Zephyrs / Articulated Trains (a few steps from this marker); Soo Terminal Warehouse Limestone Entablature ca. 1912 (within shouting 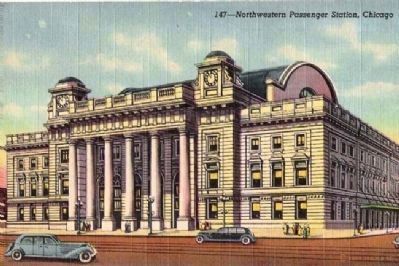 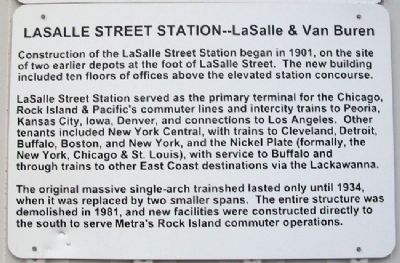 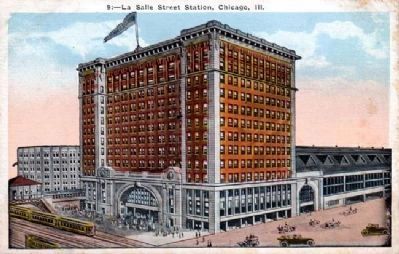 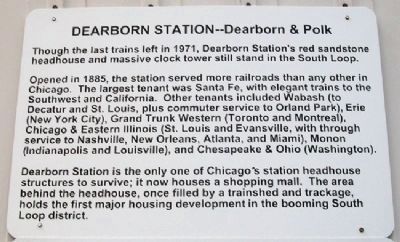 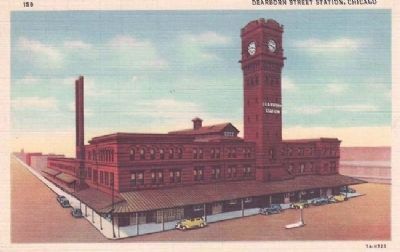 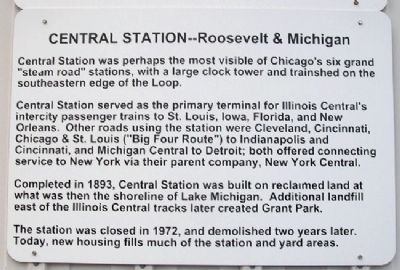 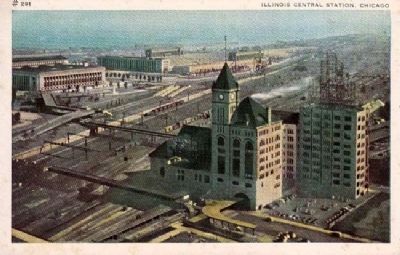 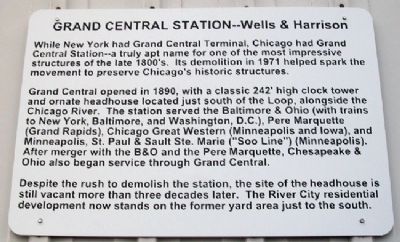 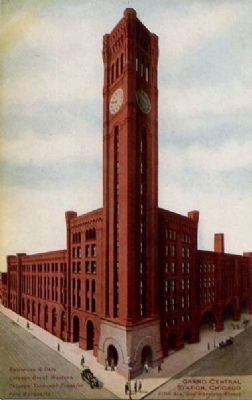