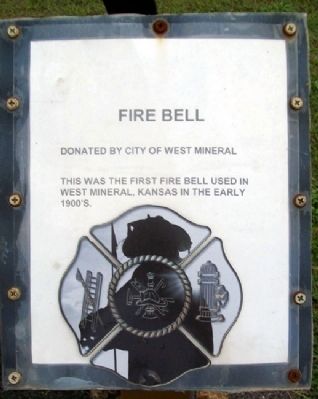 Photographed By William Fischer, Jr., October 11, 2010
1. Fire Bell Marker
Inscription.
Fire Bell. . , This was the first fire bell used in West Mineral, Kansas in the early 1900's., Donated by City of West Mineral . This historical marker was erected by Big Brutus, Inc.. It is Near West Mineral in Cherokee County Kansas

This was the first fire bell used in West Mineral, Kansas in the early 1900's.

Donated by City of West Mineral

Topics and series. This historical marker is listed in these topic lists: Charity & Public Work • Communications. In addition, it is included in the Historic Bells series list. 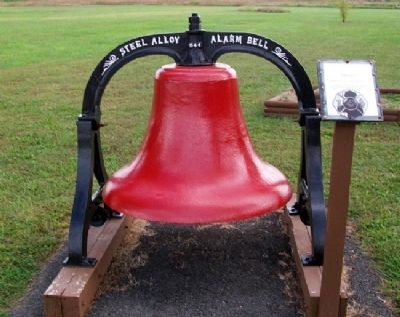 Click or scan to see
this page online
4 miles away); Missouri Pacific Wooden Frame Depot (approx. 4 miles away); Civil War Memorial (approx. 8.6 miles away). Touch for a list and map of all markers in West Mineral.

Additional commentary.
1. Additional information
The visible fittings of this nicely restored bell are all original. Unlike church and school bells, it was not hung to swing; instead, two ropes (which ran over the pulleys on the crossbars of the supports) were used to pull the clapper from side to side as rapidly as possible, producing a truly alarming sound.
— Submitted August 18, 2020, by Carl Scott Zimmerman of Kirkwood, Missouri. 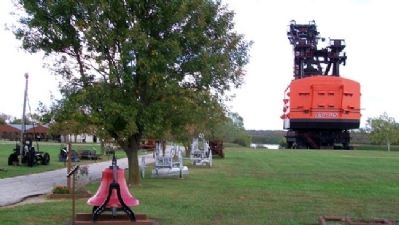