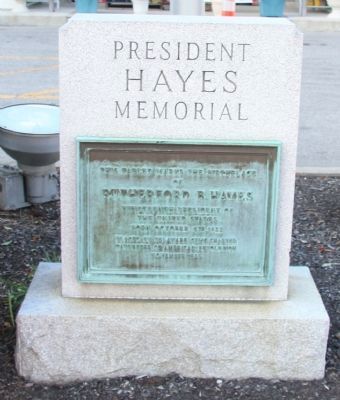 Photographed By Dale K. Benington, July 29, 2010
1. President Hayes Memorial Marker
Inscription.
President Hayes Memorial. .
This tablet marks the birthplace of Rutherford B. Hayes Nineteenth President of The United States Born October 4th, 1822. . This memorial was erected in 1926 by The Delaware City Chapter, Daughters of American Revolution.. It is in Delaware in Delaware County Ohio

This tablet marks the birthplace
of
Rutherford B. Hayes
Nineteenth President of
The United States
Born October 4th, 1822

Erected 1926 by The Delaware City Chapter, Daughters of American Revolution.

Topics and series. This historical marker and memorial is listed in this topic list: Government & Politics. In addition, it is included in the Former U.S. Presidents: #19 Rutherford B. Hayes series list. A significant historical month for this entry is October 1919.

Location. Marker has been permanently removed. It was located near 40° 17.933′ N, 83° 4.015′ W. Marker was in Delaware, Ohio, in Delaware County. Marker was on East Williams Street (U.S. 36) east of North Sandusky Street. This historical marker was located in the downtown Delaware business district, about two and a half blocks west of US 23, in front of what is currently a BP gasoline service station. Touch for map. Marker was in this post office area: Delaware OH 43015, United States of America. Touch for directions.

Other nearby markers. At least 8 other markers are within walking distance of this location. Rutherford B. Hayes Birthplace (here, next to this marker); Old City Hall and Opera House 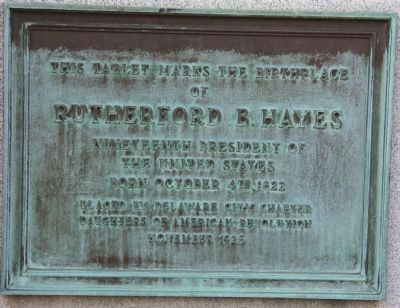 Photographed By Dale K. Benington, July 29, 2010
2. President Hayes Memorial Marker
Close-up view of the text that is on the historical marker. 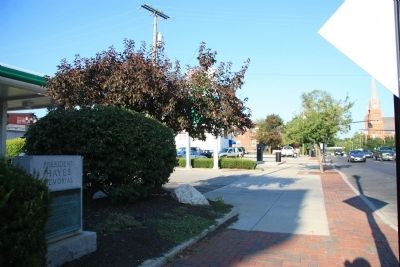 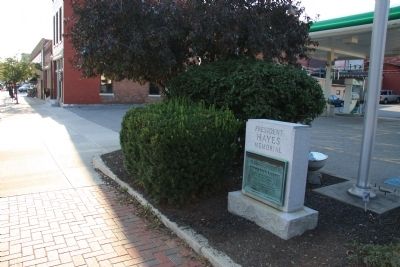 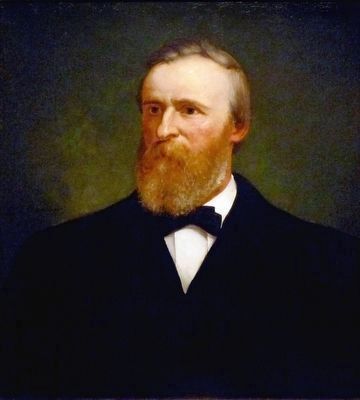 “The presidential election of 1876 was among the closest in American history. Although Democratic candidate Samuel J. Tilden won the popular vote by 250,000, his Electoral College total was one short of the majority needed for election. Republican Rutherford B.Hayes would not concede because of disputed results in Florida, Louisiana, South Carolina, and Oregon. Both parties agreed to appoint an electoral Commission, which awarded the Florida vote and presidency to Hayes. A prior secret agreement between Republicans and Democrats made Hayes president in return for his withdrawal of federal troops from the South. This effectively ended Reconstruction and black political participation in the South and it restored the rule of the Democratic Party there. Even though he was not a strong president, Hayes did take initial steps toward curbing corruption in the civil service.