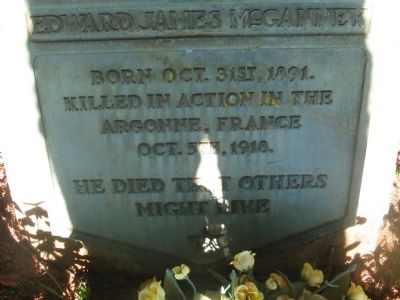 Photographed By Syd Whittle, January 19, 2011
1. Edward James McGanney Marker
Inscription.
Edward James McGanney. .
Born Oct. 31, 1891. Killed in action in the Argonne, France Oct. 5th, 1918 He died that others might live. . This historical marker is in Smartsville in Yuba County California

Topics. This historical marker is listed in this topic list: War, World I. A significant historical year for this entry is 1891.

Location. 39° 12.436′ N, 121° 17.834′ W. Marker is in Smartsville, California, in Yuba County. Marker can be reached from Smartville Road, on the right when traveling west. Monument is located on the grounds of the Church of the Immaculate Conception. Touch for map. Marker is at or near this postal address: 8444 Smartville Road, Smartsville CA 95977, United States of America. Touch for directions.

Photographed By Syd Whittle, February 7, 2011
2. Edward James McGanney Marker is at the Base of This Tree

Click or scan to see
this page online
October 5, 1918, near Montfaucon, France. The story of Edward James McGanney is the story of a young life given in splendid patriotism. When America demanded that her sons make the supreme sacrifice in the cause of human liberty, he answered, and his great adventure spelled death to him on the battlefield. At the time he was called to the colors he was a successful young farmer and stock-raiser of Smartsville, Yuba County, where he was reared and educated.

He was one of the first contingent of selective service men to leave Yuba County. While in training – first at Camp Lewis and then at Camp Kearney – he was asked to remain on this side to instruct recruits, but he elected to go with his comrades over seas to France. He was assigned to the Supply Company of the 30th Infantry of the 3rd Division. He took part in the Meuse-Argonne battles, the decisive engagements of the World War. It was while on a mission fraught with dangers to him known, that he fell at Montfaucon. He was buried where he fell."
Source: “History of Yuba and Sutter Counties California”, Historical Record Company, Los Angeles, 1924.
http://www.yubaroots.com/military/vets-wwi-1.htm
— Submitted February 1, 2011. 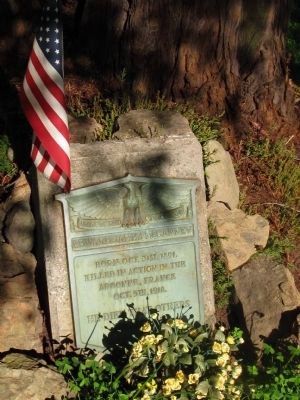 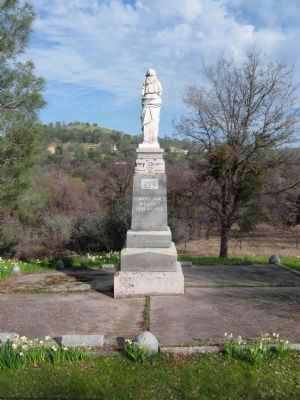 Photographed By Syd Whittle, February 7, 2011
4. McGanney
This monument is located at the family plot at the Immaculate Conception Catholic Cemetery (aka Smartsville Catholic Cemetery) on McGanney Road. This McGanney family monument attests to the importance of this early prominent Smartsville family.
Edward James McGanney
1891 - 1918
killed in action. Argonne, France
October 5, 1918
He died that nations might be free 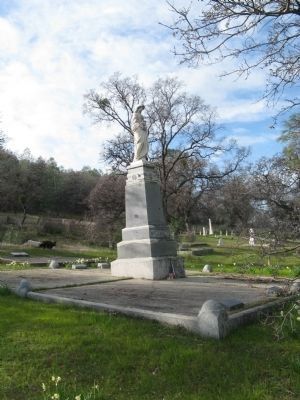 Photographed By Syd Whittle, February 7, 2011
5. Front of the Monument 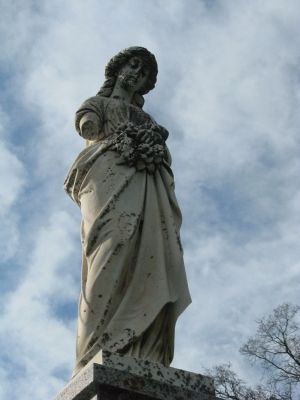