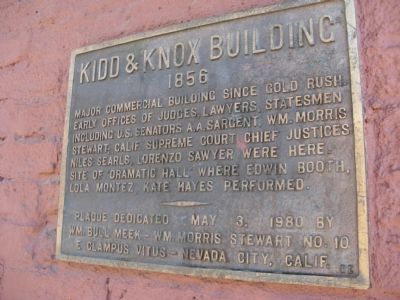 Topics and series. This historical marker is listed in these topic lists: Entertainment • Industry & Commerce. In addition, it is included in the E Clampus Vitus series list.

Other nearby markers. At least 8 other markers are within walking distance of this marker. Nevada County Traction Company (a few steps from this marker); The Flagg Building 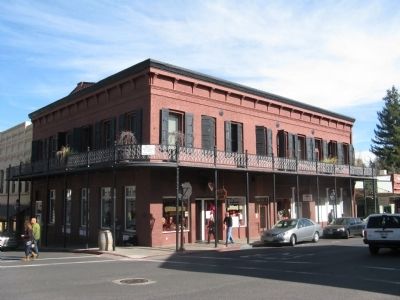 Regarding Kidd & Knox Building. The Kidd-Knox Building, is a two-story iron-shuttered brick structure built in 1856 on the site where Hamlet Davis opened the first store on Broad Street in 1850. Davis took in a partner and replaced his tent store with a two-story frame building that August of 1850. The first floor housed the store, while upstairs the patrons could rent newspapers and periodicals. Reading material was always in short supply and a newspaper or magazine, regardless of age, was almost worth its weight in gold to the miners. Destroyed by the fire of 1856, along with the Nevada City’s first brick structure located next door. The present building was 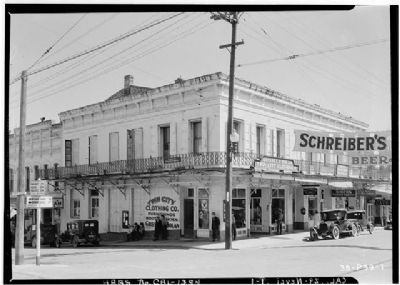 By Roger Sturtevant, April 7, 1934
3. Kidd & Knox Building
Historic American Building Survey, Library of Congress
HABS CAL,29-NEVCI,2-
erected shortly after. The wrap-around wrought iron balcony added a look of distinction to this building which has been one of the town’s major commercial buildings. It has also housed the offices of many lawyers and judges and was the site for performances by famous entertainers of the time.

Also see . . .
1. Historical Sketch of of Nevada City and Township. A transcribed chapter of Bean’s History & Directory of Nevada County, California written in 1867 tells interesting facts of the time and gives a description of the Kidd & Knox Building and its uses during the 1860’s. (Submitted on February 14, 2011.)