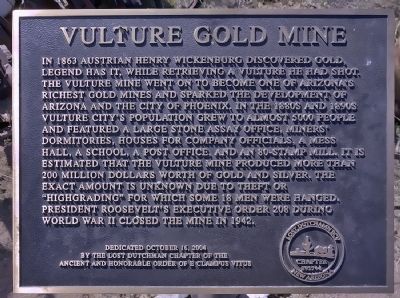 By Michael D Martin, February 15, 2011
1. Vulture Gold Mine Marker
Inscription.
Vulture Gold Mine. . In 1863 Austrian Henry Wickenburg discovered gold, legend has it, while retrieving a vulture he had shot. The vulture mine went on to become one of Arizona's richest gold mines and sparked the development of Arizona and the city of Phoenix. In the 1880s and 1890s Vulture City's population grew to almost 5000 people and featured a large stone Assay Office, miners' dormitories, houses for company officials, a mess hall, a school, a post office, and an 80-stamp mill. It is estimated that the vulture mine produced more than 200 million dollars worth of gold and silver. The exact amount is unknown due to theft or "highgrading" for which some 18 men were hanged. President Roosevelt's executive order 208 during World War II closed the mine in 1942. . This historical marker was erected in 2004 by Lost Dutchman Chapter of the Ancient and Honorable Order of E Clampos Vitus. It is Near Wickenburg in Maricopa County Arizona

In 1863 Austrian Henry Wickenburg discovered gold, legend has it, while retrieving a vulture he had shot. The vulture mine went on to become one of Arizona's richest gold mines and sparked the development of Arizona and the city of Phoenix. In the 1880s and 1890s Vulture City's population grew to almost 5000 people and featured a large stone Assay Office, miners' dormitories, houses for company officials, a mess hall, a school, a post office, and an 80-stamp mill. It is estimated that the vulture mine produced more than 200 million dollars worth of gold and silver. The exact amount is unknown due to theft or "highgrading" for which some 18 men were hanged. President Roosevelt's executive order 208 during World War II closed the mine in 1942.

Erected 2004 by Lost Dutchman Chapter of the Ancient and Honorable Order of E Clampos Vitus.

Topics and series. This historical marker is listed in these topic lists: Industry & Commerce • Natural Resources • Settlements & Settlers. In addition, it is included in the E Clampus Vitus series list. A significant historical year for this entry is 1863. 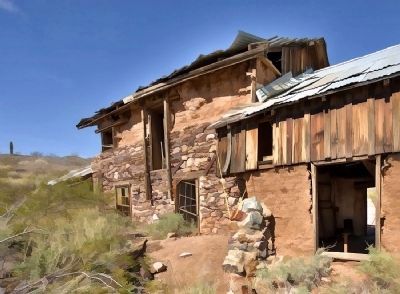 Click or scan to see
this page online
33° 49.302′ N, 112° 50.144′ W. Marker is near Wickenburg, Arizona, in Maricopa County. Marker can be reached from Vulture Mine Road 12 miles south of Grand Avenue (Route 60). Marker is on South side of parking lot and starting point of the self guided tour. Touch for map. Marker is in this post office area: Wickenburg AZ 85390, United States of America. Touch for directions.

Additional commentary.
1. Ingley: Preserve the Vulture Mine
by Kathleen Ingley, columnist - Feb. 13, 2011 12:00 AM; The Arizona Republic

Ingley: Preserve the Vulture Mine
Deep in the desert northwest of Phoenix, almost forgotten, are the remains of a fabulously rich gold mine.

You can walk into the past at the Vulture Mine. The mechanism that pulled up more than $200 million in gold is still poised over a tunnel. The assay building, gatehouse and stamp mill are still here. The "hanging tree," where about 18 criminals were strung up, still stands. The heavy iron 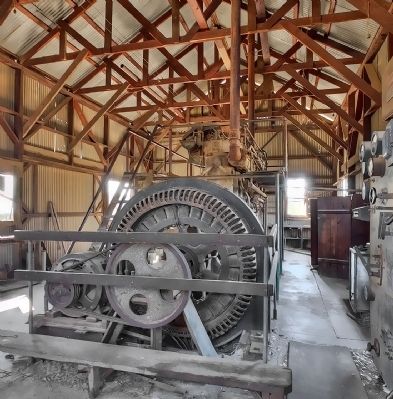 The ghosts, if they're here, include saints and sinners: Superintendant James Cusenbary, twice fired and thrice hired, who stuck up for fair wages and safety. Dr. John Pierson, who killed his patients, pocketed their savings and ended up in an insane asylum.

"It's like a Western movie come to life," says Bernadine McCollum, president of the Vulture Mine Preservation & Restoration Association. "You get a real sense of what it was like, the hardships, what people had to go through to found not just Arizona but the whole Southwest."

The non-profit, formed in 2009, is racing to protect this irreplaceable slice of Arizona history. It's astonishing that so much has lasted so long. But now, time is catching up. Buildings that date to the 19th century are falling apart. Stone walls are collapsing. Adobe bricks are crumbling away. Wood is rotting.

Arizona celebrates its centennial in a year, on Feb. 14, 2012. Here's the perfect 100th birthday gift for Arizonans to give our state: Save this precious part of our heritage.

That means buying the Vulture Mine, which is privately owned and has been on the market for years. It means raising the funds and volunteer help to restore buildings on the mine property and adjoining federal land.

The vision, says McCollum, is to create a place where 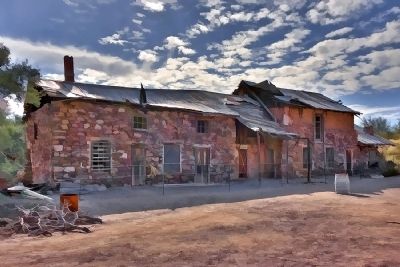 By Michael D Martin, February 15, 2011
4. Vulture Gold Mine Assay House
Built in 1884
you could get a feel for the everyday life and tough, dangerous work of a mining town, when you couldn't escape the pounding noise of stamp mills and you didn't know if the ore would run out and a careless move could leave you with a crushed arm.

There could be a museum, an interpretive center, electronic re-creations, guided tours and demonstrations of metalworking and other crafts.

Visitors can go to Tombstone to experience the state's silver-mining history. They can learn about copper mining in Bisbee and Jerome.

What's missing is gold. And the Vulture Mine can fill that gap.

Just how Henry Wickenburg discovered and named the Vulture Mine in 1863 is hazy. As one story goes, he spotted an outcropping of white quartz, a telltale sign of gold, when he was traveling along the Hassayampa River and gave the mine its name when he saw vultures circling a nearby peak (now named Vulture Peak).

Wickenburg was terrified of Indian attacks as he started working the mine in this isolated saguaro-dotted spot. So, he built a small stone house as a defensive outpost. You can still see the walls, pierced with small circular windows made from cans so he could fire a rifle without exposing himself to danger.

The mine eventually went down at least 1,300 feet, and now has four levels above the water table. At some point, with enough stabilization, 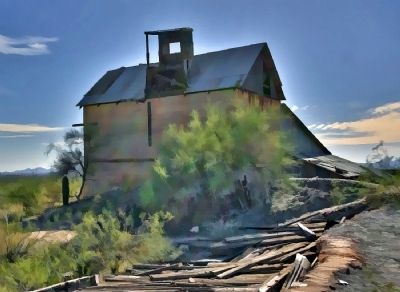 By Michael D Martin, February 15, 2011
5. Vulture Gold Mine
tours inside could be possible.

Visitors right now can see a wide pit known as the Glory Hole, where part of the mine collapsed in 1923. Seven men, who had sneaked into the mine to dig for gold, were buried alive - going "to their glory" - when they cut into the pillars holding up the roof.

The mine kept operating until 1942, when the U.S. government closed all mines that weren't part of the war effort.

The Vulture Mine still has a rich vein of history, geology and archaeology for students and researchers to investigate. A town of nearly 5,000, a mix of Anglo, Hispanic and Chinese residents, flourished in the area.

Their children went to class in two schoolhouses, built in 1881 and 1934, which are on federal land managed by the Bureau of Land Management. In 1915, the girls won the state basketball championship.

The Vulture Mine Preservation and Restoration Association is moving immediately to save the schoolhouses, because they're on public land. It is seeking a $10,000 emergency grant from the National Trust for Historic Preservation, plus a grant for an architectural plan to preserve the building. Volunteers are ready to help with the work.

The plan is to re-create a typical late-19th-century classroom, with period artifacts, in the 1881 school and to use the 1934 building for an interpretive center. 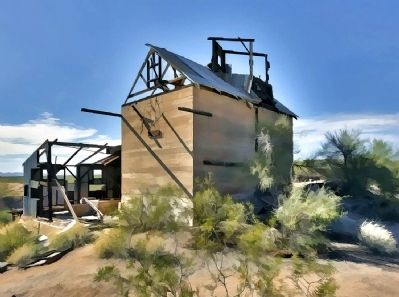 By Michael D Martin, February 15, 2011
6. Vulture Gold Mine
has been listed at $6.5 million in the past, but market conditions have changed over time. The preservation association wants to raise about $100,000 to put down as an option and is looking at a variety of tools for the final purchase.

Maricopa County is working with the BLM to create a park with trails and camping in the Vulture Peak area. The preservation of Vulture Mine would be a perfect fit, adding a historical and educational dimension.

The Vulture was one of the earliest major mining operations in Arizona. As the population in the area grew, the enterprising Jack Swilling saw profits in a rising demand for food. He raised money from Henry Wickenburg and others to build an irrigation system along the Salt River - the start of a tiny town called Phoenix.

"This is where modern Arizona history had its start," says Prescott architect Bill Otwell. "And it's falling apart."

As Arizona nears the century mark, the Vulture Mine is more of a treasure than ever. We have to save it.
— Submitted February 18, 2011. 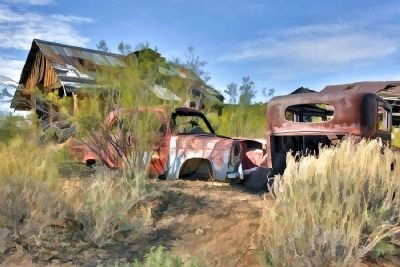