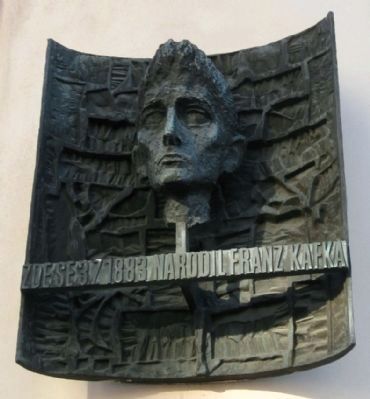 Topics. This historical marker is listed in this topic list: Arts, Letters, Music. A significant historical month for this entry is July 1953.

Other nearby markers. At least 8 other markers are within walking distance of this marker. Here Albert Einstein Played the Violin (about 180 meters away, measured in a direct line); Rudolf Kremlička (about 210 meters away); Francis Skaryna (approx. 0.2 kilometers away); Birthplace of Jaroslav Heyrovský (approx. 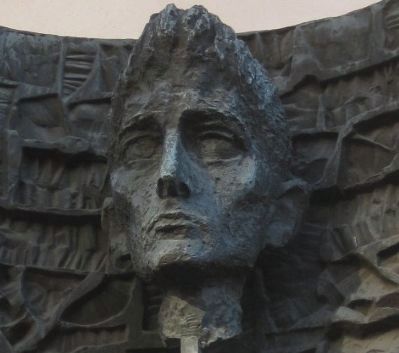 Also see . . .
1. Franz Kafka. The Franz Kafka Museum's biographical summary of Kafka's life, with links to pages with more detail: " Best known and world-renowned representative of Prague German literature, one of the most significant prose writers in 20th-century world literature. After graduating in law from Prague's German University, he worked from 1907 to 1922 as an official in two insurance associations. He regarded writing as his main task in life and found it hard to reconcile in with his work at the office which he performed conscientiously. He fell ill with a lung disease in 1917 and bottled vainly with the illness for seven years. He was extremely self-critical about his literary output, releasing only a small portion of it for publication, mostly under protest. The majority of his works, the part which was to ensure his international reputation, was published from 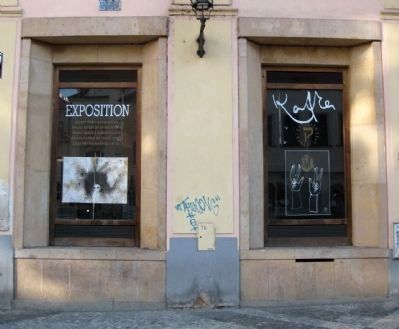 By Andrew Ruppenstein, August 24, 2009
3. Expozice Franz Kafky windows
On the ground floor of Kafka's birthplace is the Expozice Franz Kafky, or Exposition Kafka, a small museum with a number of displays relating to the life of Franz Kafka. (Note: this is not the same as the Kafka Museum, which is on the other side of the river).
his legacy thanks to the refusal of Kafka's closest friend Max Brod to respect the author's wishes that the manuscripts be burned without mercy." (Submitted on March 31, 2011.)

2. Eighty years after his death, Franz Kafka finally has a statue in Prague. The image of a young man riding on another one's shoulders through the night streets of Prague appears in Franz Kafka's early short story "Description of a Struggle": "And now - with a flourish, as though it were not the first time - I leapt onto the shoulders of my acquaintance, and by digging my fists into his back I urged him into a trot. But since he stumped forward rather reluctantly and sometimes even stopped, I kicked him in the belly several times with my boots, to make him more lively. It worked and we came fast enough into the interior of a vast but as yet unfinished landscape." (Submitted on March 31, 2011.) 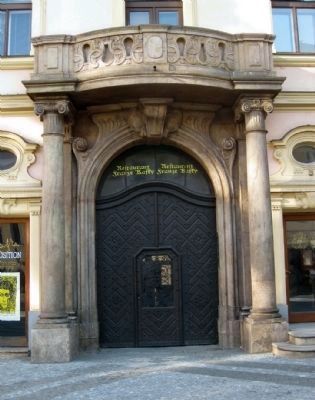 By Andrew Ruppenstein, August 24, 2009
4. Franz Kafka birthplace - main entrance to the building
This is the main entrance to Kafka's birthplace. In addition to the Exposition Kafka (in the same building, just to the left of this entrance), is a restaurant named after Kafka (name visible above the door here). 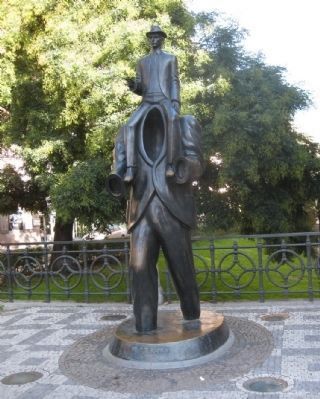 By Andrew Ruppenstein, August 24, 2009
5. Statue of Franz Kafka
Just three short blocks from Kafka's birthplace is a statue of Kafka, located by the Spanish Synagogue. A project of the Franz Kafka Society, it was designed by sculptor Jaroslav Rona and installed in December 2003. 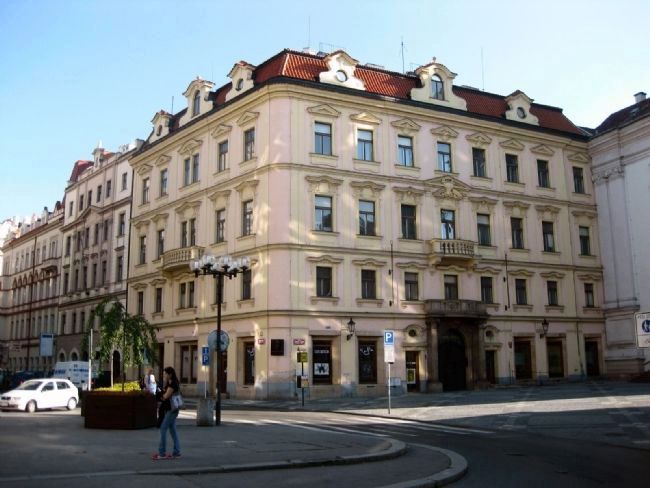