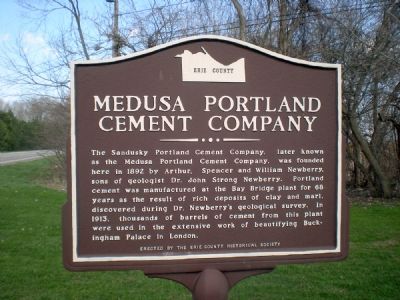 The Sandusky Portland Cement Company, later known as the Medusa Portland Cement Company, was founded here in 1892 by Arthur, Spencer and William Newberry, sons of geologist Dr. John Strong Newberry. Portland cement was manufactured at the Bay Bridge plant for 68 years as the result of rich deposits of clay and marl, discovered during Dr. Newberry's geological survey. In 1913, thousands of barrels of cement from this plant were used in the extensive work of beautifying Buckingham Palace in London.

Location. 41° 28.147′ N, 82° 48.718′ W. Marker is in Bay View, Ohio, in Erie County. Marker is on Barrett Road near Newberry Avenue, on the left when traveling west. The marker stands on the south side of the road, about three quarters of a mile NNE of the Bay View exit from Ohio Route 2. Touch for map. Marker is in this post office area: Sandusky OH 44870, United States of America. Touch for directions.

Other nearby markers. At least 8 other markers are within 5 miles of this marker, measured as the crow flies. Fort Sandusky 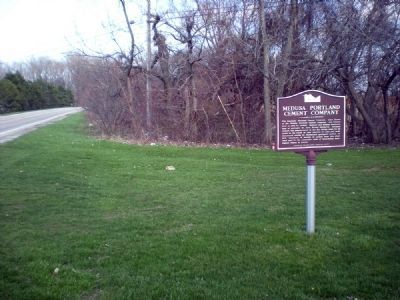