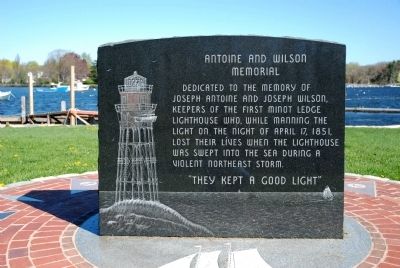 Photographed By Roger W. Sinnott, May 1, 2011
1. Antoine and Wilson Memorial Marker
Inscription.
Antoine and Wilson Memorial. . , Dedicated to the memory of Joseph Antoine and Joseph Wilson, keepers of the first Minot Ledge Lighthouse who, while manning the Light on the night of Apr. 17, 1851, lost their lives when the lighthouse was swept into the sea during a violent northeast storm.,
“They kept a good light.”. . This memorial was erected in 2000. It is in Cohasset in Norfolk County Massachusetts

Dedicated to the memory of Joseph Antoine and Joseph Wilson, keepers of the first Minot Ledge Lighthouse who, while manning the Light on the night of Apr. 17, 1851, lost their lives when the lighthouse was swept into the sea during a violent northeast storm.

Topics and series. This historical marker and memorial is listed in this topic list: Notable Places. In addition, it is included in the Lighthouses series list. A significant historical date for this entry is April 17, 1967.

Other nearby markers. At least 8 other markers are within 4 miles of this marker, measured as the crow flies 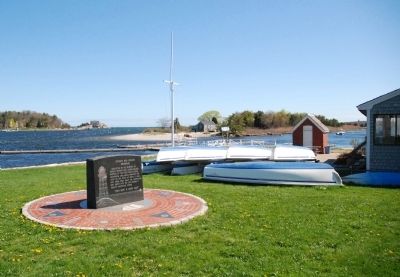 Photographed By Roger W. Sinnott, May 1, 2011
2. The View from Government Island
Beyond the marker is the mouth of Cohasset harbor and the open Atlantic Ocean. Both the original and the present Minot’s Ledge Lighthouses were constructed 2.6 miles out from here, at a point blocked in this view by Wood Island and Scituate Neck at right.

Regarding Antoine and Wilson Memorial. Roughly two miles offshore from the Massachusetts towns of Cohasset and North Scituate sits Minot’s Ledge, a normally submerged hazard well-known to mariners since Capt. John Smith had a close call there in 1614.

Following a sharp increase in shipwrecks early in the 19th century, mariners clamored for a lighthouse to be erected on or near that ledge. A thorough assessment was conducted in 1847 by Capt. William H. Swift, United States Engineers, who strongly opposed a stone tower. Instead, he favored an iron-pile structure that would present much less resistance to powerful waves in a storm. In supervising the actual construction, Smith sank his iron pilings five feet into the ledge and extended them 50 feet above the water. Atop these “stilts” he perched a storeroom, keeper’s quarters, and lantern room, so that the overall height became 75 feet. 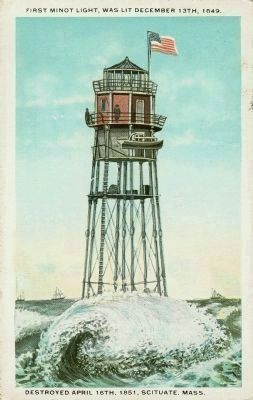 Photographed By Roger W. Sinnott, April 28, 2011
3. First Minot’s Light
Perched on 10-inch-diameter iron columns, the short-lived first lighthouse on Minot’s Ledge is imagined in this postcard rendition from about 1925. (The card gives an erroneous date for when the lamp was officially lit; perhaps it refers to a test.)
less than three months before the lighthouse was to be lit for the first time, the Saint John, carrying immigrants to America from the Irish potato famine, struck parts of this ledge with the loss of 99 souls. It was the worst disaster the area had ever seen.

According to the log of keeper Isaac Dunham, the light was lit for the first time on January 1, 1850. But within weeks Dunham began to have serious misgivings about the structure’s safety. For example, on April 6, 1850, he wrote, “The wind E. blowing hard with an ugly sea which makes the Light House real like a Drunken Man = I hope God will in mercy still the raging sea = or we must perish.” By October of that year, completely unnerved, Dunham quit.

The next keeper, John W. Bennett, initially scoffed at his predecessor’s fearfulness. Then in December he, too, petitioned to have the structure reinforced. Yet as late as January 9, 1851, engineer Smith wrote a long newspaper article explaining why the lighthouse could not possibly fall over.

In mid-April 1851, a major nor’easter descended on the New England coast. Flood waters undermined railway beds south of Boston, and the city itself briefly became an island. In its April 16th afternoon edition, the Boston Evening Transcript wrote, “Great apprehensions are felt in regard to the lighthouse at Minot’s Ledge. The weather 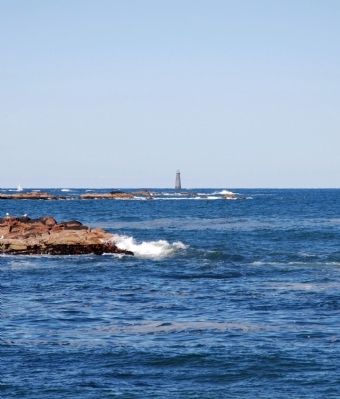 Photographed By Roger W. Sinnott, September 26, 2009
4. The Present Minot’s Light
The replacement lighthouse, completed in 1860, is a thoroughly substantial granite structure. This is how it looks from the beach at North Scituate — at a distance of 2.0 miles.
is still too misty to distinguish if it is still standing.” That same day, a man with a telescope on the Cohasset beach thought he could make out that the lighthouse was starting to list. Keeper Bennett had gone to Boston a few days earlier to purchase a new dory for the lighthouse, but he’d left his two assistants, Joseph Antoine and Joseph Wilson, to operate the light.

As late as 10 p.m., Cohasset residents could still glimpse the lighthouse’s beacon, and around 1 a.m. they could hear its bell being rung. But the light of dawn revealed the awful truth: The lighthouse was gone. The body of Antoine later washed ashore at Nantasket, several miles north of Cohasset. Wilson apparently managed to swim to Gull Rock, which is somewhat closer to shore than Minot’s Ledge, where he too died.

In the years immediately following this tragedy, a lightship was temporarily anchored at Minot’s Ledge as plans were made for a much more massive structure to be built (see the link, above, to the adjacent marker).