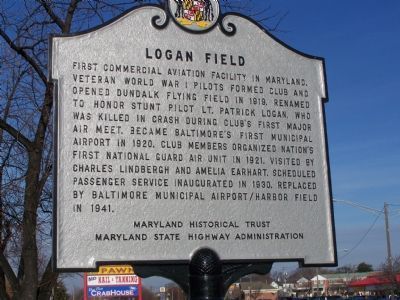 Topics. This historical marker is listed in these topic lists: Air & Space • War, World I. A significant historical year for this entry is 1919.

Location. 39° 14.928′ N, 76° 31.142′ W. Marker is in Dundalk, Maryland, in Baltimore County. Marker is on Dundalk Ave. 0.2 miles north of Dunhaven Road, on the right when traveling north. Marker is in front of Logan Village Center. Touch for map. Marker is in this post office area: Baltimore MD 21224, United States of America. Touch for directions.

Other nearby markers. At least 8 other markers are within 2 miles of this marker, measured as the crow flies. Korean and Viet Nam Veterans Memorial (approx. 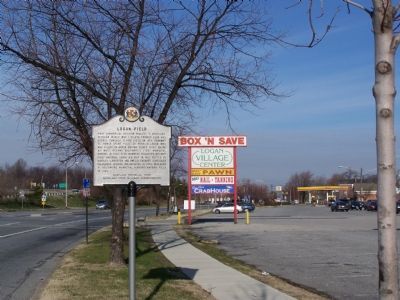 By William Pfingsten, December 22, 2007
2. Marker with shopping center sign.
Air field was replaced with houses and commercial buildings many years ago.