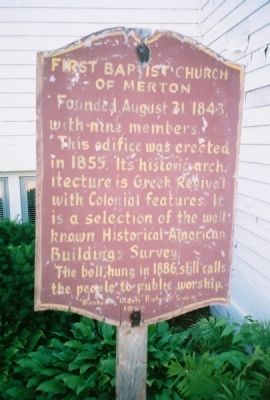 By Linda Hansen, 2009
1. First Baptist Church of Merton Marker
Inscription.
First Baptist Church Of Merton. . Founded August 31, 1843 with nine members.. This edifice was erected in 1855. Its historic architecture is Greek Revival with Colonial features. It is a selection of the well known Historical American Buildings Survey.. The bell hung in 1886 still calls the people to public worship. . This historical marker was erected in 1968 by Waukesha County Historical Society. It is in Merton in Waukesha County Wisconsin

This edifice was erected in 1855. Its historic architecture is Greek Revival with Colonial features. It is a selection of the well known Historical American Buildings Survey.

The bell hung in 1886 still calls the people to public worship.

Topics. This historical marker is listed in this topic list: Churches & Religion. A significant historical year for this entry is 1843.

Location. This marker has been replaced by another marker nearby. 43° 8.7′ N, 88° 18.41′ W. Marker is in Merton, Wisconsin, in Waukesha County. Marker is on Main Street south of Huntington Street, on the left when traveling south. Touch for map. Marker is at or near this postal address: 6996 Main Street, Merton WI 53056, United States of America. Touch for directions. 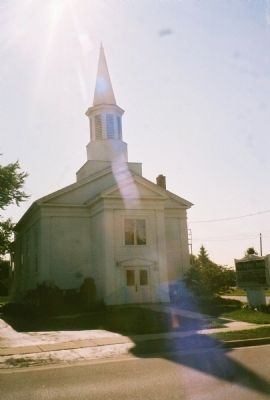 Additional commentary.
1. Additional History
In 1843 nine people, including some from Massachusetts, formed a congregation which later became the First Baptist Church of Merton. This first group met in the home of E.B. Quiner.

The church was originally called Warren Baptist Church because the town was named Warren before Merton. In 1855, the first church building was built for $2,000 on a half-acre of land that cost $50.

This building is listed in "Historic Wisconsin Architecture" as being a Greek Revival with colonial variations. An octagonal cupola with spire and single tiers of windows are features of this style of architecture. Drawings and descriptions are filed under the United States Historic Sites Survey in the National Archives. It is recorded there as "possessing exceptional historic or architectural interest and is worthy of most careful preservation for the benefit of future generations."

A bell was hung in the church's belfry in 1888. The church was lifted off its foundation in order to put a basement under it in 1913. This new space provided room for a new furnace and an area for Sunday School classes. New pews were added in 1919. Originally, there was a shed for keeping the horses of the parishioners on Sunday mornings. This was torn down in 1934, and a new parsonage was built there in 1940. In 1962 a new narthex was added to the front of the church and additional remodeling was done to provide a Mother's room, cloak room, refurnished balcony and new kitchen. Services here on Sunday mornings have been broadcast over the airwaves since 1951.