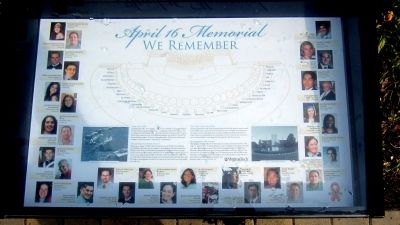 April 16th, 2007
On April 16th, 2007, 32 innocent lives were lost in a senseless act of campus violence. Twenty-seven young, gifted graduate and undergraduate students died that day, two in Ambler Johnston Residence Hall, toward the south side of campus, and 25 more in Norris Hall, toward the north. Five dedicated professors also perished in Norris Hall along with their students, all done by a deranged student. Dozen more students and members of the faculty and staff were injured or traumatized.

The 32 Original Hokie Stones
Dedicated on August 19, 2007, this memorial recreates 32 Hokie Stones placed on the Drillfield in the hours after the tragedy by the student-run volunteer organization Hokies United. Friends and classmates spontaneously arranged the stones in a semicircle, honoring each person slain, and the 32 stones quickly became a gathering place to mourn, to pay respects, and to reflect on the lives of these vibrant scholars taken from our midst. These stones became the inspiration for this permanent memorial, physically reflecting the unmitigated sorrow felt by our campus, by their loved ones, 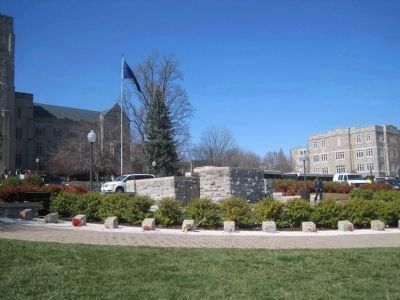 Click or scan to see
this page online
and by people the world over.

The Permanent Memorial
This memorial honors each of the 32 people killed that day. Each person’s name is carved here in Hokie Stone, a native limestone that has been part of Virginia Tech tradition for more than a century. This special stone is used to symbolize the enduring bond of our Hokie Nation, its relentless spirit, our commitment to move forward as one community, and our determination to never forget the 32 people who died that morning.

Remembering The Victims
Our memorial brochure tells a little about these 32 students and faculty members. They ranged in age from 18 to 76 and represented a variety of academic areas, along with nearly every major faith and ethnic group. The brochure biographies begin with the farthest left stone as you face the memorial and continue around the semicircle to the right. You can learn more at www.werember.vt.edu. We hope that you are able to reflect on the tremendous promise each of them embodied for our world and that you take with you a little of their creativity, intelligence, humility, and humanity when you depart. Live for 32. 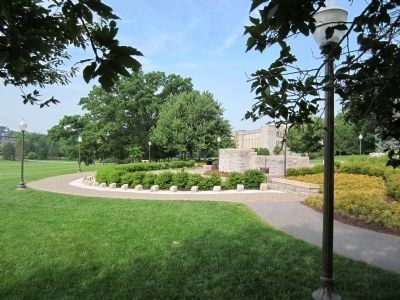 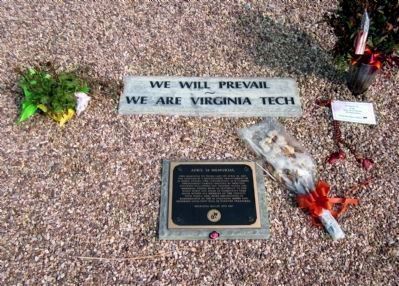 Photographed By Bernard Fisher, May 28, 2011
4. We Will Prevail
We Are Virginia Tech
April 16th Memorial
This memorial to those lost on April 16th, 2007,
was inspired by a spontaneous arrangement of
32 Hokie Stones—the cornerstone of buildings
throughout campus—created by grieving
students following the tragedy. Today, the
memorial stands both as a testimony to the
Hokie Spirit and sense of community that
arose within all members of the Virginia
Tech family, and, more importantly, in
remembrance of the 32 inquiring minds and
inspiring lives that will be forever treasured.
Dedicated August 19th 2007
old

Topics. This historical marker and memorial is listed in these topic lists: Disasters • Education. A significant historical month for this entry is April 1304. 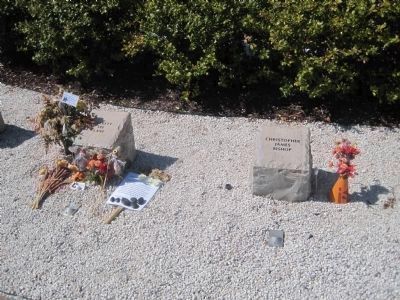 Photographed By Kevin W., April 5, 2013
5. April 16th Memorial Marker
Two of the 32 Hokie Stones at the Memorial. The notes adjacent to the stone on the left commemorate Jarrett Lee Jones' birthday.
from Drillfield Drive, 0.1 miles west of Stanger Street. Touch for map. Marker is in this post office area: Blacksburg VA 24060, United States of America. Touch for directions. 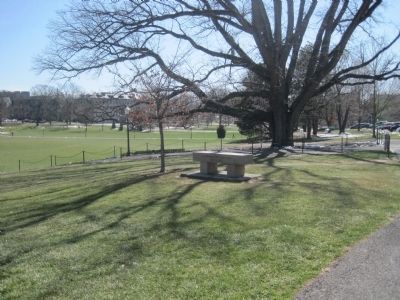