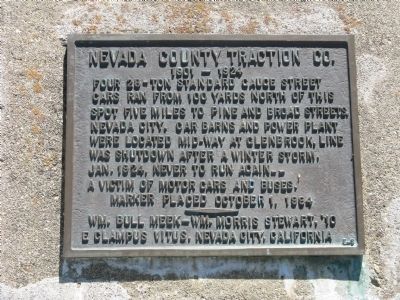 Four 28-ton standard gauge street cars ran from 100 yards north of this spot five miles to Pine and Broad Streets, Nevada City. Car barns and power plant were located mid-way at Glenbrook. Line was shut down after a winter storm, Jan. 1924, never to run again – a victim of motor cars and buses.

Topics and series. This historical marker is listed in this topic list: Railroads & Streetcars. In addition, it is included in the E Clampus Vitus series list. A significant historical year for this entry is 1924.

Other nearby markers. At least 8 other markers are within walking distance of this marker. North Star Mine Powerhouse (a few steps from this marker); Empire House 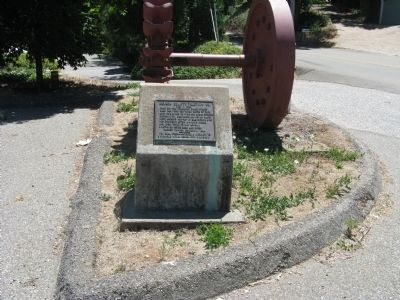 Regarding Nevada County Traction Co.. The Nevada County Traction Company was organized by John Martin in 1901. Construction began on June 1, 1901 and the initial 70 pound rails were in place within three weeks. A power generating plant and 3-stall car barn was built in Glenbrook, the mid-point of the line. Completed in October, 1901, the route went from Boston Ravine, up Mill Street, to East Main Street in Grass Valley; then over Spring Hill to Glenbrook, on to Sacramento Street, turning left and ending on Broad Street in Nevada City. The total cost for five miles of track, four cars, a service car and the power plant-car barn was $217,000. The fare for one way was a nickle. 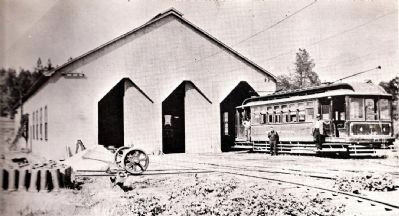 Ken Kidder Collection, circa 1910
3. Nevada County Traction Company
The NCT car barn at Glenbrook. This was half-way between Grass Valley and Nevada City. The power generators were located in the rear portion of the building.

Related marker. Click here for another marker that is related to this marker. A marker at the other end of the street-car line in Nevada City. 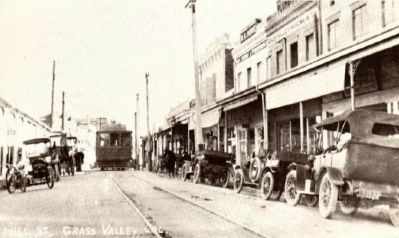