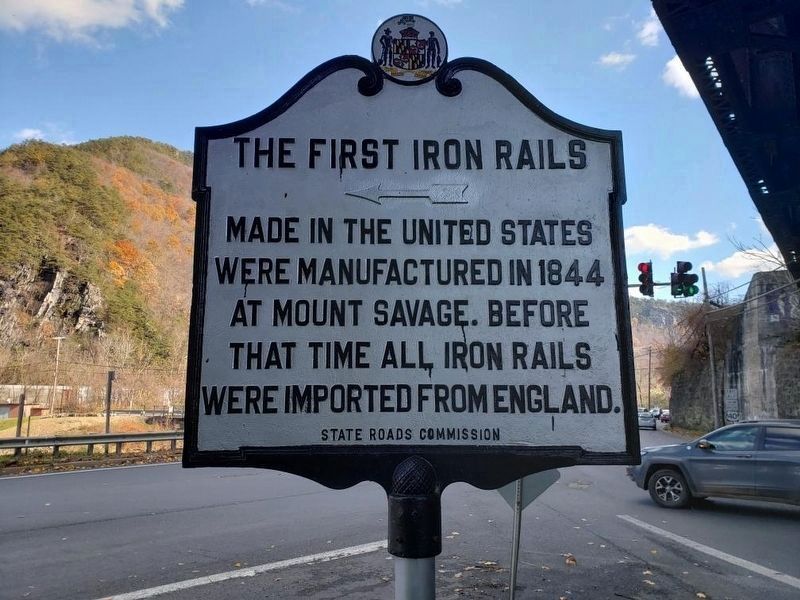 Photographed By Jenn Wintermantel
1. The First Iron Rails Marker
Marker has been relocated to underneath railroad bridge and arrow has been painted over.
Inscription.
The first iron rails made in the United States were manufactured in 1844 at Mount Savage. Before that time all iron rails were imported from England. . This historical marker was erected by State Roads Commission. It is in Narrows Park in Allegany County Maryland

The first iron rails made in the United States were manufactured in 1844 at Mount Savage. Before that time all iron rails were imported from England.

Topics. This historical marker is listed in these topic lists: Industry & Commerce • Railroads & Streetcars. A significant historical year for this entry is 1844.

Regarding The First Iron Rails. Mount Savage and its Foundry Row is 7.5 miles from this marker on Route 36. 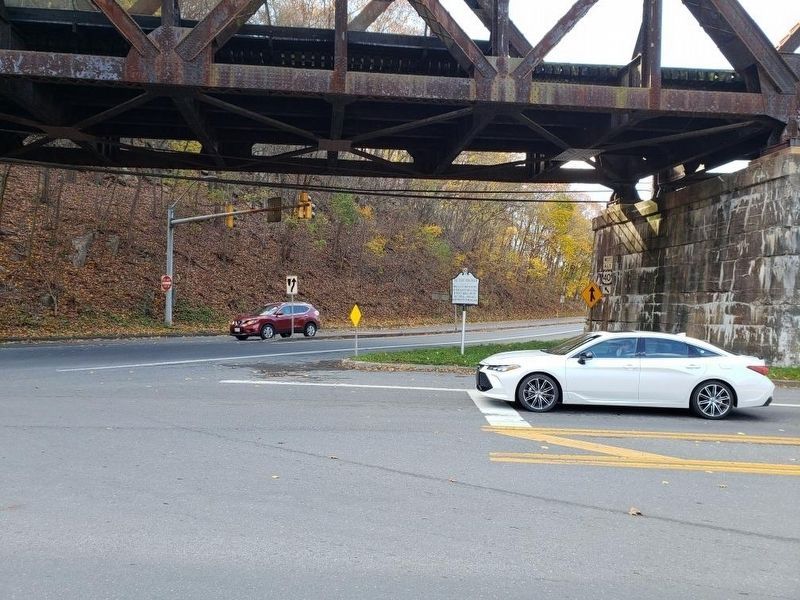 Click or scan to see
this page online
First Iron Rail, C&P Railroad, Brick Yard, Union Mining Company. This is the official website for the town of Mt Savage. On it you will find much History and Photos of the town. (Submitted on May 21, 2007, by Dennis Lashley of Mount Savage, Maryland.) 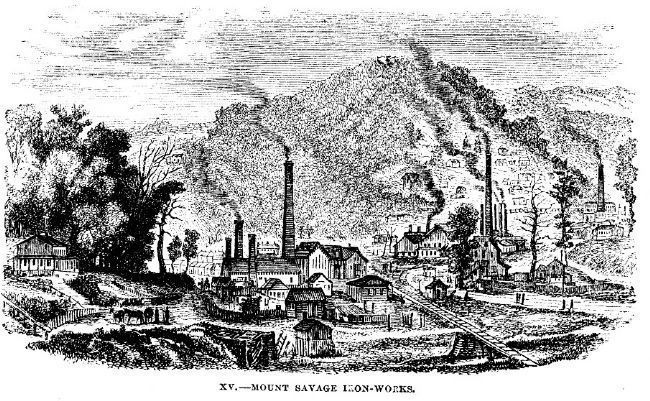 1857
3. Mount Savage Iron Works in the 1850s
This image comes from Brantz Mayer's article "A June Jaunt" in Harper's Magazine (vol. 14, iss. 83, April 1857), pp. 592-612 (the illustration is on p. 603). The subtitle of the article is "With some wanderings in the footsteps of Washington, Braddock, and the early Pioneers." In the article, a newspaperman takes a train and canal journey from Washington up the Potomac to see the National Road, the C&O canal, and the B&O railroad. During the jaunt, he goes through Mount Savage and described the somewhat-thriving furnaces and rolling mills there (the works had seen some contraction in the late 1840s, bu was prospering again in the 1850s).
Click for more information. 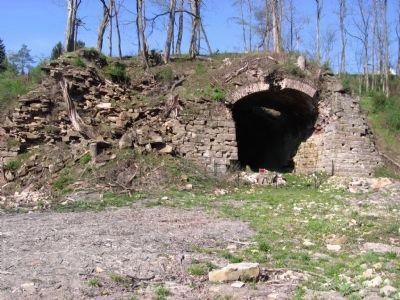 Photographed By Patricia Lawrence, April 27, 2009
4. Mt Savage Iron Furnace Ruins
These are the ruins of one of two iron furnaces that provided the iron for the rails.
Credits. This page was last revised on July 6, 2020. It was originally submitted on July 20, 2006, by J. J. Prats of Powell, Ohio. This page has been viewed 2,688 times since then and 56 times this year. Photos:   1, 2. submitted on November 11, 2018, by Mike Wintermantel of Pittsburgh, Pennsylvania.   3. submitted on January 25, 2009, by Steven Walton of Bellefonte, Pennsylvania.   4. submitted on May 20, 2009, by Patricia Lawrence of Gaithersburg, Maryland.
Share this page.