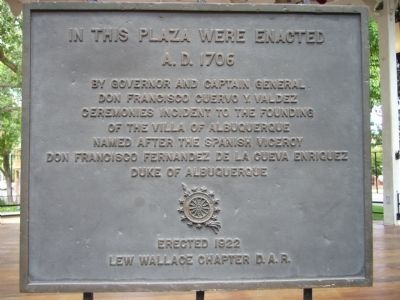 In this plaza were enacted
A.D. 1706
by Governor and Captain General Don Francisco Cuervo Y. Valdez ceremonies incident to the founding of the Villa of Albuquerque named after the Spanish Viceroy Don Francisco Fernandez de la Cueva Enriquez Duke of Albuquerque

Topics and series. This historical marker is listed in this topic list: Settlements & Settlers. In addition, it is included in the Daughters of the American Revolution (DAR) series list. A significant historical year for this entry is 1706.

Location. 35° 5.77′ N, 106° 40.193′ W. Marker is in Albuquerque, New Mexico, in Bernalillo County. Marker can be reached from North Plaza Street NW west of San Felipe Street NW, on the left when traveling west. Marker is on the east side of the gazebo in "Old Town Plaza". Touch for map. Marker is in this post office area: Albuquerque NM 87104, United States of America. Touch for directions. 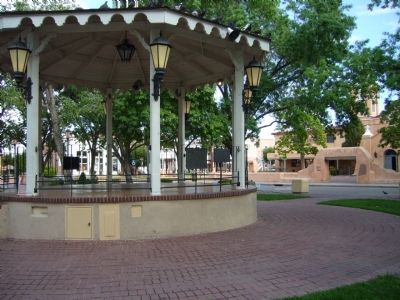