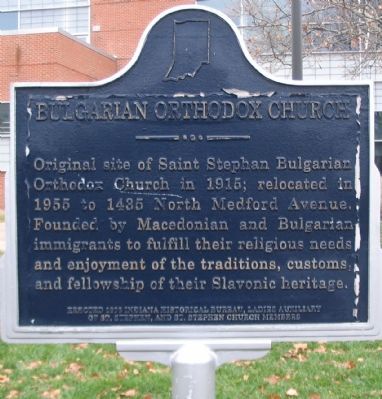 Original site of Saint Stephan Bulgarian Orthodox Church in 1915; relocated in 1955 to 1435 North Medford Avenue. Founded by Macedonian and Bulgarian immigrants to fulfill their religious needs and enjoyment of the traditions, customs, and fellowship of their Slavonic heritage.

Topics and series. This historical marker is listed in this topic list: Churches & Religion. In addition, it is included in the Indiana Historical Bureau Markers series list. A significant historical year for this entry is 1915. 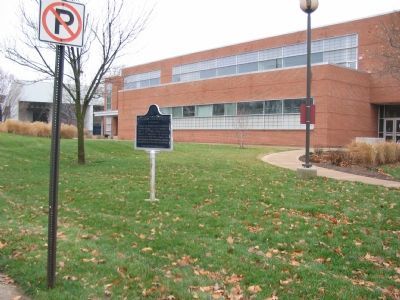 Click or scan to see
this page online
of this marker. Isaac Blackford (within shouting distance of this marker); Civil War Training Camp (about 600 feet away, measured in a direct line); Camp Sullivan (Military Park) (approx. 0.2 miles away); Jones Tabernacle A.M.E. Zion Church Site (approx. 0.2 miles away); Greek Orthodox Church (approx. 0.2 miles away); Mary Cable / School No. 4 Site (approx. ¼ mile away); Bethel African Methodist Episcopal Church (approx. ¼ mile away); Talking Wall (approx. ¼ mile away). Touch for a list and map of all markers in Indianapolis.
Credits. This page was last revised on June 16, 2016. It was originally submitted on January 7, 2008, by Craig Swain of Leesburg, Virginia. This page has been viewed 1,494 times since then and 12 times this year. Photos:   1, 2. submitted on January 7, 2008, by Craig Swain of Leesburg, Virginia.
Share this page.