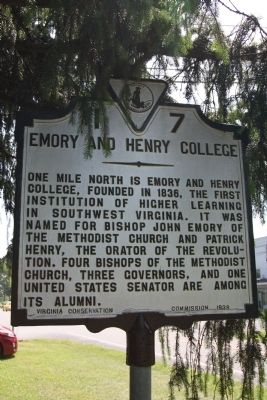 One mile north is Emory and Henry College, founded in 1836, the first institution of higher learning in southwest Virginia. It was named for Bishop John Emory of the Methodist Church and Patrick Henry, the orator of the Revolution. Four bishops of the Methodist Church, three governors, and one United States senator are among its alumni.

Topics. This historical marker is listed in this topic list: Education. A significant historical year for this entry is 1836.

Location. 36° 45.365′ N, 81° 50.005′ W. Marker is near Emory-Meadow View, Virginia, in Washington County. Marker is at the intersection of Lee Highway (U.S. 11) and College Drive (County Route 737), on the right when traveling south on Lee Highway. It is just south of Exit 26, Interstate 81 in the Blacksburg community of Washington County. Touch for map. Marker is in this post office area: Emory VA 24327, United States of America. Touch for directions.

Other nearby markers. At least 8 other markers are within 8 miles of this marker, measured as the crow flies. Buchanan-Blakemore House (approx. 0.8 miles away); Tobias Smyth House (approx. 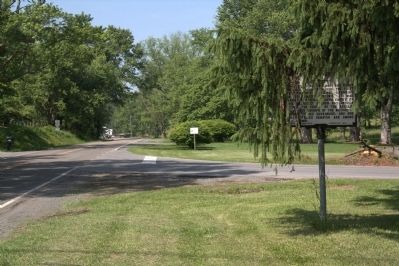 Also see . . .  A Brief History of Emory & Henry College. “From its founding until the outbreak of the Civil War, Emory & Henry enjoyed growth in enrollment, expansion of course offerings, and additions to the facilities. When the war came to Southwest Virginia, the college temporarily suspended classes, although the faculty remained on duty; the administration building was used as a Confederate hospital. Immediately after the Civil War, classes resumed, but the political and economic instability of that era made the late 1800’s a time of struggle for the college. With the inauguration of Richard G. Waterhouse as president in 1893 and an improvement in the regional economy, enrollment stabilized and the college began an ambitious building program.” (Submitted on August 20, 2011.)

Editor’s want-list for this marker. Photos of the campus • Can you help?
Share This Page.