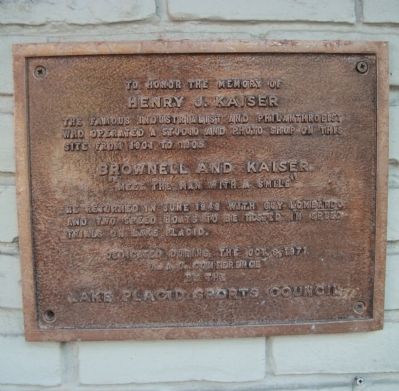 By Howard C. Ohlhous, August 11, 2011
1. Henry J. Kaiser Marker
Inscription.
Henry J. Kaiser. .
To Honor the Memory of Henry J. Kaiser The famous industrialist and philanthropist who operated a studio and photo shop on this site from 1901 to 1905 Brownell and Kaiser "Meet The Man with a Smile" He returned in June 1949 with Guy Lombardo and two speed boats to be tested in speed trials on Lake Placid., Dedicated During the Oct. 6, 1971 A.A.U Conference by the Lake Placid Sports Council . . This historical marker was erected in 1971 by Lake Placid Sports Council. It is in Lake Placid in Essex County New York

To Honor the Memory of
Henry J. Kaiser
The famous industrialist and philanthropist
who operated a studio and photo shop on this
site from 1901 to 1905
Brownell and Kaiser
"Meet The Man with a Smile"
He returned in June 1949 with Guy Lombardo
and two speed boats to be tested in speed
trials on Lake Placid.

Dedicated During the Oct. 6, 1971
A.A.U Conference
by the
Lake Placid Sports Council

Topics. This historical marker is listed in these topic lists: Industry & Commerce • Sports. A significant historical month for this entry is June 1949.

Other nearby markers. At least 8 other markers are within 7 miles of this marker, measured as the crow flies. Kate Smith Memorial (about 700 feet away, measured in a direct line); Sonja Henie Ice Fountain 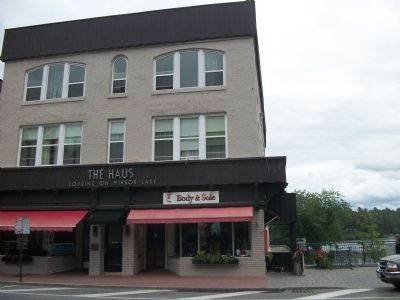 By Howard C. Ohlhous, August 11, 2011
2. Henry J. Kaiser Marker
The village of Lake Placid is set beside Mirror Lake, which can be seen to the right of the building with the Kaiser plaque, which is mounted to the left of the center doorway.


At age 18, he was working as a traveling salesman for a photo supply company including sales calls in Lake Placid, New York. He liked Lake Placid so much that, when he was 20, he approached a Lake Placid photographer and offered to work for him for free. The catch was that, if Kaiser could double the man’s business, they would share the profits 50-50. Within a year, Kaiser had tripled the business, and the photographer ended up selling it to him. Kaiser went on to become a legendary industrialist and social

Library of Congress
3. Henry J. Kaiser
advocate. He established the Kaiser Shipyard which built Liberty ships during World War II, formed Kaiser Aluminum and Kaiser Steel, and organized Kaiser Permanente health care for his workers and their families. With his acquired wealth, he initiated the Kaiser Family Foundation, a charitable organization.


In June of 1949 The Ticonderoga Sentinel was reporting from North Elba, "For the second successive week end, Henry J. Kaiser has visited Lake Placid to check on the progress of his two big speed boats. Guy Lombardo also appeared here Saturday to try out the massive 32-foot Aluminum First, with which he will try to break the world's mile straightaway record in the time trials scheduled Saturday & Sunday."


Gaetano Alberto "Guy" Lombardo (June 19, 1902 – November 5, 1977) was a Canadian-American bandleader and violinist who became famous as band leader of the Royal Canadians. The Royal Canadians were noted for playing the traditional song Auld Lang Syne as part of the celebrations. Their recording of the song still plays as the first song of the new year in New York's Times Square. Lombardo was also an important figure in hydroplane speedboat racing, winning the Gold Cup in 1946 in his record-breaking speedboat, Tempo VI, designed and built by the legendary John L. Hacker.


Henry Kaiser, who had built hundreds of ships during 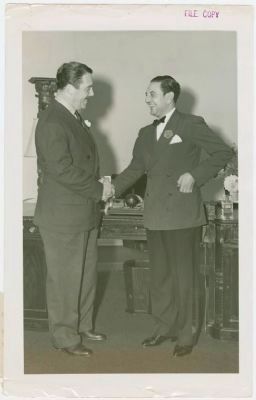 New York Public Library
4. Grover Whalen and Guy Lombardo (right)
World War II, was supposedly paying for a new boat capable of great speeds for Lombardo to use to set the new world record. The boat was to be built by Ventnor Boat Works in Atlantic City, New Jersey, which also built Lombardo’s Tempo VI. Kaiser, who had a summer home in Lake Placid, said that he wanted the record to be broken there. Lombardo tested ALUMINUM FIRST at Lake Placid, New York, in June of 1949, but the tests were obviously unsatisfactory. No speeds were ever announced and plans for a straightaway record attempt were abandoned.