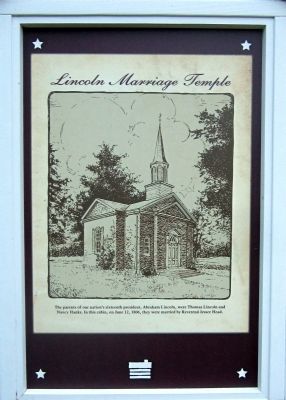 Photographed By Bernard Fisher, August 18, 2011
1. Lincoln Marriage Temple Marker
Inscription.
Lincoln Marriage Temple. . The parents of our nation's sixteenth president, Abraham Lincoln, were Thomas Lincoln and Nancy Hanks. In this cabin, on June 12, 1806, they were married by Reverend Jesse Head. . This historical marker is in Harrodsburg in Mercer County Kentucky

The parents of our nation's sixteenth president, Abraham Lincoln, were Thomas Lincoln and Nancy Hanks. In this cabin, on June 12, 1806, they were married by Reverend Jesse Head.

Topics and series. This historical marker is listed in this topic list: Notable Buildings. In addition, it is included in the Former U.S. Presidents: #16 Abraham Lincoln series list. A significant historical date for this entry is June 12, 1806.

Location. 37° 45.722′ N, 84° 50.758′ W. Marker is in Harrodsburg, Kentucky, in Mercer County. Marker can be reached from the intersection of South College Street (U.S. 127) and West Lexington Street, on the right when traveling south. Located in Old Fort Harrod State Park. Touch for map. Marker is at or near this postal address: 100 South College Street, Harrodsburg KY 40330, United States of America. Touch for directions. 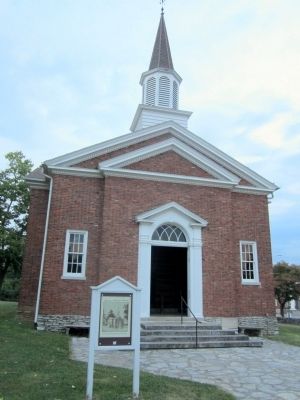 Click or scan to see
this page online
(within shouting distance of this marker); Bowman Memorial Gate (within shouting distance of this marker); St. Peter African Methodist Episcopal Church (about 300 feet away, measured in a direct line); James Harrod (about 400 feet away). Touch for a list and map of all markers in Harrodsburg. 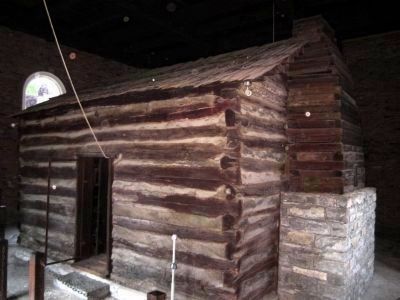 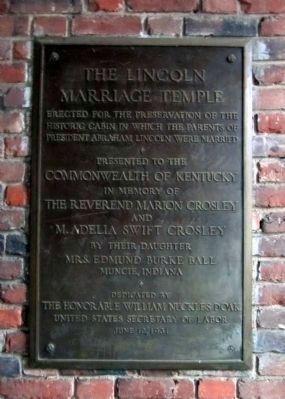 Photographed By Bernard Fisher, August 18, 2011
4. The Lincoln Marriage Temple
Erected for the preservation of the
Historic cabin in which the parents of
President Abraham Lincoln were married

Presented to the
Commonwealth of Kentucky
In memory of
The Reverend Marion Crosley
And
M. Adelia Swift Crosley
By their daughter
Mrs. Edmund Burke Ball
Muncie, Indiana 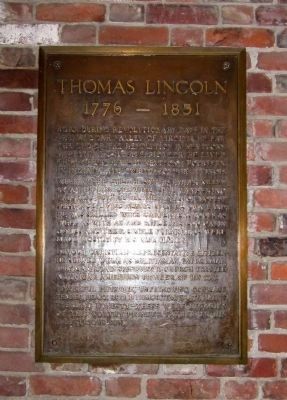 Photographed By Bernard Fisher, August 18, 2011
5. Thomas Lincoln (1776 - 1851)
Born during Revolutionary days in the Shenandoah Valley of Virginia, he saw the end of the Revolution in Kentucky. A westward moving pioneer, he lived thirty-four years in Kentucky, fourteen in Indiana and twenty-one in Illinois.

When a mere child, he saw his father killed by an Indian. Growing up “a wandering laboring boy,” he became a man of modest substance living always upon his own land. He was skilled with carpenter's tools as well as with ax and rifle. His log cabin homes and their homes and their simple furnishings were made mostly by his own hands. 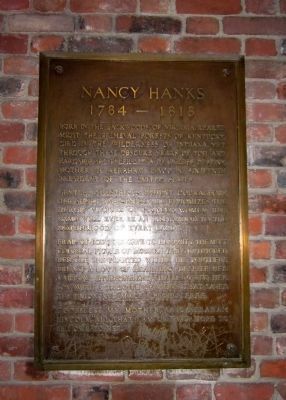 Photographed By Bernard Fisher, August 18, 2011
6. Nancy Hanks (1784 – 1818)
Born in the backwoods of Virginia, reared midst the primeval forests of Kentucky, died in the wilderness of Indiana. Yet, through these obscure years of toil and hardship she fulfilled a deathless destiny. Mother of Abraham Lincoln, sixteenth President of the United States.

Gentle, industrious, patient, courageous, her short and simple life epitomizes the heroic virtues of pioneer women; her name will ever be an inspiration to the motherhood of every land.

Frail of body, she gave to humanity the most colossal figure of modern times. Untutored herself, she planted within his youthful breast a love of learning. Despite her narrow environment, she endowed her son with a breadth of vision that saved the Union and made a people free.