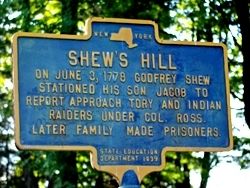 Topics. This historical marker is listed in this topic list: War, US Revolutionary. A significant historical month for this entry is June 1818.

Regarding Shew's Hill. If you read the exploits of the Shew family of old Fish 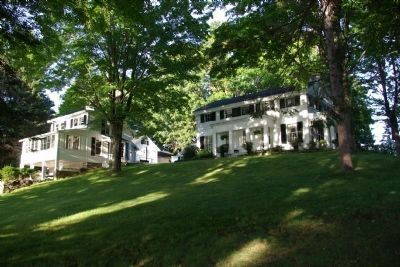 Click or scan to see
this page online
House, they mention a high rise of ground overlooking the Sacandaga River. It became a good location to see anyone passing up or down the river. During the many raids down the Sacandaga during our American Revolutionary War, Godfrey Shew used this location to station one of his sons, to forewarn them of any approaching enemy. It has ever since been known locally as Shew's Hill. The Fish House (Northampton) Cemetery is located here as well and the home of Doctor Orton, an early physician in the town. His son, Percy Orton, was instrumental in suggesting a number of these markers in the hamlet.

Also see . . .  Jacob Shew: Returns home on St. Patrick's Day. Transcription of James F. Morrison's book "A History of Fulton County in the Revolution" by dedicated volunteer, Peggy Menear for the Fulton County NYGenWeb. (Submitted on September 1, 2011, by ELizabeth Emery of Gloversville, New York.)
Credits. This page was last revised on December 8, 2017. It was originally submitted on August 25, 2011. This page has been viewed 501 times since then and 28 times this year. Photos:   1, 2. submitted on August 25, 2011, by ELizabeth Emery of Gloversville, New York. • Bernard Fisher was the editor who published this page.

Editor’s want-list for this marker. Wide shot of marker and its surroundings • Can you help?
Share this page.