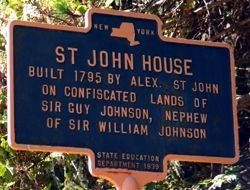 Topics. This historical marker is listed in this topic list: Notable Buildings. A significant historical year for this entry is 1795. 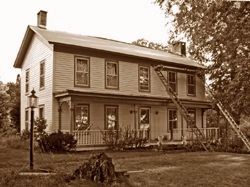 Click or scan to see
this page online
This is one of the older homes, in the Fish House Settlement, still existing today Among other things, Alexander St. John was a surveyor and engineer. He is credited by some historians as having the village and town of St. Johnsville named after him. He became one of the town's leading citizens and is buried in the Fish House Cemetery, not far from his old home. This old home in Fish House, like others here, should be preserved; they are some of the oldest homes in our country.
Credits. This page was last revised on November 26, 2017. It was originally submitted on August 25, 2011, by ELizabeth Emery of Gloversville, New York. This page has been viewed 525 times since then and 28 times this year. Photos:   1, 2. submitted on August 25, 2011, by ELizabeth Emery of Gloversville, New York. • Bill Pfingsten was the editor who published this page.
Share this page.