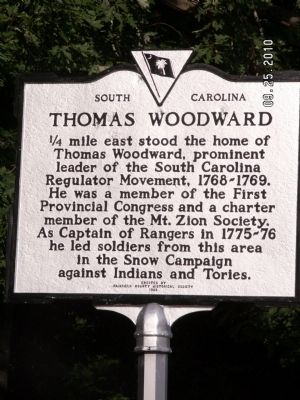 Photographed By Anna Inbody, September 25, 2010
1. Thomas Woodward Marker
Inscription.
Thomas Woodward. . 1/4 mile east stood the home of Thomas Woodward, prominent leader of the South Carolina Regulator Movement, 1768-1769. He was a member of the First Provincial Congress and a charter member of the Mt. Zion Society. As Captain of Rangers in 1775-76 he led soldiers from this area in the Snow Campaign against Indians and Tories. . This historical marker was erected in 1969 by Fairfield County Historical Society. It is in Rockton in Fairfield County South Carolina

1/4 mile east stood the home of Thomas Woodward, prominent leader of the South Carolina Regulator Movement, 1768-1769. He was a member of the First Provincial Congress and a charter member of the Mt. Zion Society. As Captain of Rangers in 1775-76 he led soldiers from this area in the Snow Campaign against Indians and Tories. 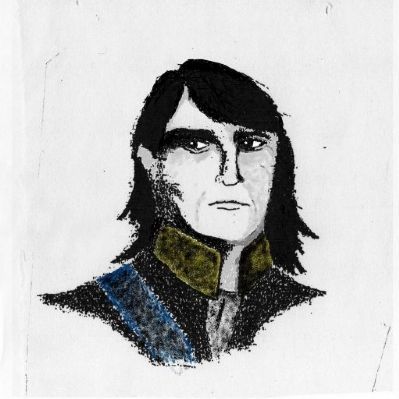 When the Cherokee Indian War ended and peace was restored to the back country of South Carolina, there was an influx of settlers coming down from Pennsylvania, western Virginia, and North Carolina. With this wave of immigration also came an undesirable element, composed of horse thieves, Indian traders, drunkards, and immoral men. These outlaws banded together, maintained contact with their own kind in other colonies, and congregated into communities, terrorizing the scattered settlers, and becoming a scourge to the back country. They dwelled in their own settlements, with their women and children. Often times young girls of respected families were abducted. In the summer of 1767 a wave of crime swept the back country.

The following was carried in the Gazette of July 27, 1767 – “The gang of villains from Virginia and North Carolina who have for some years past in 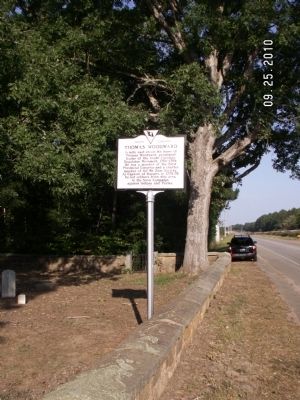 Photographed By Anna Inbody, September 25, 2010
3. Thomas Woodward Marker
the marker is inside the wall of the Thomas Woodward Cemetery
small parties under particular leaders, infested the back parts of the Southern provinces, stealing horses from one and selling them to the next, not withstanding the late public example made of several of them, we hear are more formidable then ever as to numbers, and more audacious and cruel in their outrages. It is reported that they consist of more than 200, for a chain of communication with each other, and have places of general meeting, where in imitation of councils of war, they form plans of operation and defense, and alluding to their sevrecy and fidelity to each other, call their places, “free mason lodges.” Instances of their cruelty to the people in the back settlements where they rob or otherwise abuse, are so numerous and shocking that a narrative of them would fill a whole gazette, and every reader with horror. They at present range in the forks between the Broad, Saludy, and Savannah Rivers. Two of the gang were hanged last week at Savannah, viz, Lundy Hart and Obadiah Greenage. Two others, James Ferguson and James Hambersam were killed when these were taken.”

Travel from the back country to Charleston was difficult. A trip from Fairfield County on the rough roads and trails required a weeks ride on horseback, or from two to three weeks by wagon. Thus the time and trouble involved in making a trip from the interior to the capitol left the 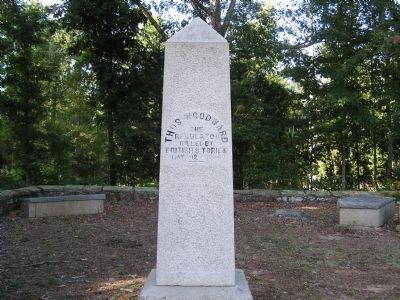 Photographed By Anna Inbody
4. Thomas Woodward Tombstone
back country virtually without courts or law enforcement. County Courts were non existent, justices of the peace had only slight judicial power and criminal trials were held in Charleston. Out of desperation the respected and law abiding men of the back country organized a Regulation. Small planters and leading men alike joined the movement to rid the country of the lawless. Between the Broad and Catawba Rivers the Regulators were activated by Thomas Woodward, Barnaby Pope, and Edward McGraw.

Thomas Woodward was a large man, of commanding presence, was very active, and possessed great physical strength, as verified by an incident related by his grandson, Hon. Joseph A. Woodward. Captain Woodward together with a part of his company were in pursuit of a band of Tories, who took refuge in a stoutly built log cabin on Little River. This presented a problem as to how to dislodge them. The Captain after consulting with his men as to the best plan of attack, ordered them to be ready. He rushed for the door, and with one powerful kick, broke it from it’s hinges, sending it into the middle of the floor. Shots were fired from outside and within and was ended with the surrender of the Tories. Tradition says it was here that the old Regulator received his only wound prior to his death. His weapon was a rifle with the barrel sawed off so that it could be wielded with one hand. As he 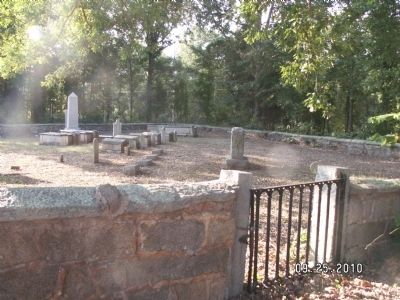 Photographed By Anna Inbody, September 25, 2010
5. Woodward Cemetery Overview
charged the door, he was holding it in front of his chest, a bullet fired from inside split on the barrel sending bits of lead into his chest.

Another demonstration of his daring courage and physical stamina – Thomas Woodward led five Regulator- Rangers on a grueling, fast paced scout beginning in late December. He and his men reached Bethabara, North Carolina on January 17, 1768. There they aided in the siege of the outlaws in the Hollow, crossed the border into Virginia, proceeded to Augusta County and took custody of four Negroes stolen in S.C. On February 29, after riding hundreds of miles, the Woodward party arrived in Charleston with the Negroes and two horse thieves.

Thomas Woodward’s first house built in Fairfield County was at a place called the Muster Field Spring, the remains of which could still be seen in 1866. There was a racetrack near the old homesite. Major Benoni Robertson and Billy Simpson were the race riders. Captain Woodward moved out on the public road near Anvil Rock. Here he constructed a frame house, which presented an imposing appearance in the days of the log cabin. People came from miles around to view it. It withstood the passage of Cornwallis and his troops through the county, but was laid waste by Sherman’s torch. He is said to have been the first subscriber to a newspaper in the District. Upon its arrival his neighbors would gather to hear the news read.

At the start of the Revolution, as he had done with the Regulators, he rallied the patriots of the Little River- Cedar Creek area, and was their leader. He was one of the first companies in South Carolina to resist the British, the eighth Company of Rangers, Commanded by Colonel William Thompson of the Continental Army in the Revolutionary War. He and his men took part in the “Snow Campaign” against the Tories in 1775. He was elected to the 1st Provincial Congress of 1775, but later that year led volunteers against Indians and Tories. He was “a terror to evil-doers and the dry bones of Tories shook at the very name of Woodward.” During the war he served as a justice of the peace. On his final campaign, he had gathered together some men of his company who were at home, and was in hot pursuit of a band of Tories. In the Tory party were some he was very anxious to catch. He ordered his men not to fire, but to strive to capture the entire party that they were following very closely. The old Captain rode at the head of his company, and had crossed Little Dutchman’s creek when a Tory turned in his saddle and fired. The bullet struck Thomas Woodward in the chest, and he fell from his horse, dead. He died as he had lived – a champion of justice. At his death, his step-son, Benjamin May, took command of his old company. His sons, John and William, served their country in the Revolution. The body of the gallant old Regulator rests in the Woodward family cemetery, near the Anvil Rock. His headstone is inscribed, “Thomas Woodward, the Regulator, killed by Tories, May 12, 1779”