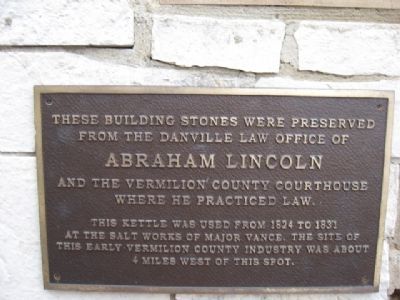 (Left marker): These building stones were preserved from the Danville Law Office of Abraham Lincoln and the Vermilion County Courthouse where he practiced law.

This kettle was used from 1824 to 1831 at the Salt Works of Major Vance. The site of this early Vermilion County industry was about 4 miles west of this spot.

(Right marker):Preserved in memory of
Robert B. "Bob" Wright, 1914 - 1988
Journalist - Historian - Humanitarian
One of the founders of the Vermilion County Museum Society

Topics and series. This historical marker is listed in these topic lists: Industry & Commerce • Landmarks • Natural Resources. In addition, it is included in the Former U.S. Presidents: #16 Abraham Lincoln series list. 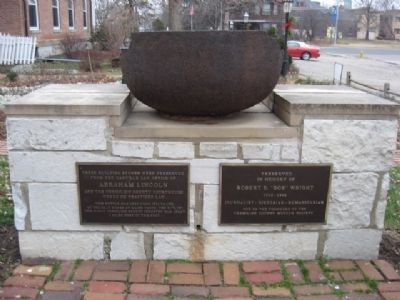 More about this marker. The marker is two-fold; it consists of a structure built from the stones from Mr. Lincoln's Law Office, with a salt kettle from the Salt Works sitting on top of the structure.