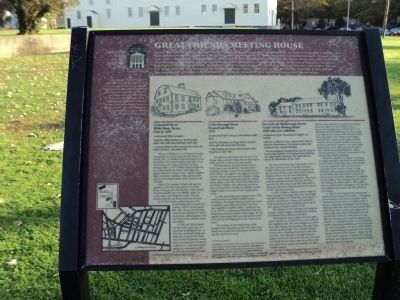 In 1639, Helen and Nicholas Easton, John Clarke, William Coddington and others left Portsmouth, the settlement founded in 1638 by Anne Hutchinson and others on the northern end of Aquidneck Island. They came south and founded Newport. Newport’s European settlers moved onto land cleared by Native Americans and built their first houses in this area which had been summer hunting grounds. The tribulations caused by the religious intolerance of Puritanism throughout New England and made life unbearable, and the founders of Newport embraced a doctrine of liberty of conscience and religion. This system, which separated church and state for those in the Atlantic World, gave the people the freedom to worship as they pleased. This simple policy of religious toleration laid the groundwork for much of what has made Newport and America unique. 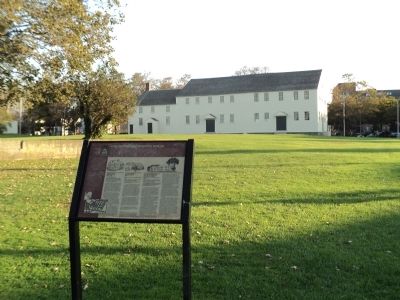 By Bill Coughlin, October 8, 2011
2. Marker in Newport
The Great Friends Meeting House can be seen behind the marker.

Click or scan to see
this page online
Coddington, one of Newport’s founders, was granted a house lot during the first division of land in 1639. His children divided and sold the property before 1673 to Francis Brinley, who built a two-story house at the corner Farewell and Marlborough Streets. In 1673, William Mayes bought the house from Brinley. As early as 1687, Mayes was granted a license to keep a tavern. Mayes’s daughter, Mary, wed Robert Nichols in 1698, and the tavern came into the Nichols family, which operated it for 200 years.

About 1730, Jonathan Nichols took over the operation of the tavern and named it the White Horse. It was popular with members of the colonial General Assembly and court officials. While the Colony House was being built in the 1730s, the General Assembly met in the tavern several times.

In 1777, the British quartered troops in the tavern during their occupancy of Newport, and the Nichols family fled. After the war, the Nicholses returned and reopened the tavern. At that time, a broad gambrel roof and the ell at the northeast corner were added. 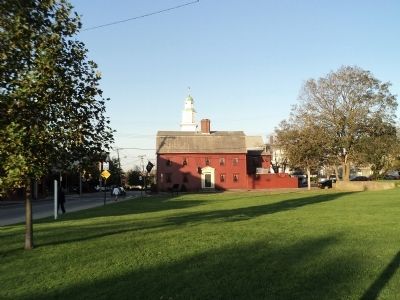 13 Marlborough Street
Newport Jail House
1772
Architectural Style:   Georgian with Federal additions
Look For:   Windows on wings and in dormers where jail cells once held criminals.
• This building was home to the Newport Police Department until 1986

The jail house was built for the city in 1772 by George Lawton and Oliver Ring Warner, replacing and earlier jail in 1680 on the same location.

The first mention of a jail in Newport was in 1658, when it was decided that “the prison then building in Newport, [was] to be the prison for the whole colony.” Throughout New England in the 17th and 18th centuries, jails served as temporary holding facilities for prisoners passing through the criminal justice system, rather than a form of punishment or an attempt at reform. Most infractions resulted in fines or various forms of public humiliation, such as being brought to the center of town and placed in stocks.

In 1800, the building was enlarged, and in 1888, it was renovated by architect Dudley Newton. According to the Newport Mercury, the jail was “never considered a particularly strong place,” and there were a number of notable escapes. During the winter of 1859-60, a mason incarcerated there removed bricks from around the window and escaped. He was captured 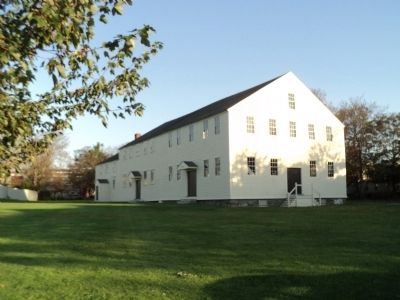 By Bill Coughlin, October 8, 2011
4. Great Friends Meeting House
when newly fallen snow allowed his tracks to be traced to his hiding place in the Ocean House Hotel.

The building was the headquarters of the Newport Police Department until 1986, when a new facility was constructed on Broadway and this building was converted to an inn.

Farewell and Marlborough Streets
Great Friends Meeting House
1699 with later additions
Architectural Style:   Postmedieval English vernacular
Look For:   Evidence in the exterior fabric that reveals the dimensions of the central section that constituted the original building.
• The Great Friends Meeting House was the home of local Quakers and the New England Yearly Meeting – the largest Yearly Meeting in the world until surpassed by Philadelphia in the 1720s.

The Great Friends Meeting House, built in 1699, is the oldest surviving house of worship in Newport. Quakers, as they were dubbed by their detractors for the way many of them rocked back and forth during religious services, were the most influential of Newport’s numerous early congregations. They dominated the political, social, and economic life of the town into the 18th century, and their ‘plain style’ of living was reflected in Newport’s architecture, decorative arts, and early landscape.

In 1647, a religious dissident named George Fox began to preach his message about the “inward 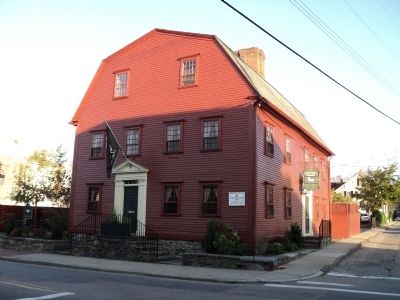 By Bill Coughlin, October 8, 2011
5. White Horse Tavern
Built in 1673, this is the oldest tavern in the United States and was the yearly gathering place for members of the Colonial Legislature.
light” throughout England. His belief that God is present in everyone spread to the colonies, and eventually to Newport aboard the ship Woodhouse, which arrived with a group of English Friends in 1657.

The simplicity of Fox’s message cut through the Puritans’ complex religious debates about salvation and attracted many followers in Newport.

New England’s early Quakers were often persecuted. Perceived as a radical threat to the stability of New England society, they were whipped and driven from other colonies, and sometimes, like Mary Dyer, executed for their beliefs. These Friends disrupted Puritan services, dressing themselves in sack cloth and ashes. Fox’s followers eventually learned to temper their actions, and in the 18th and 19th centuries Friends became known more for pacifism, close-knit communities, careful child-rearing and skill in business matters.

In 1660, Quakers in England directed a “testimony” to Charles II declaring their abhorrence of war, and this strong expression of pacifism had an impact across the Atlantic. In 1672, Nicholas Easton, a Quaker, was elected governor of Rhode Island. The following year Rhode Island passed the first conscientious objector law in America, which excused citizens from participation in the military if their religious beliefs forbade it. Quaker pacifist ideals and Rhode Island law also encouraged neutrality and peace as policies toward Native Americans. As a result, Rhode Island was spared the destruction that occurred in other colonies during King Philip’s War, a Native American uprising in 1675 and 1676 prompted by the seizing of their lands by Europeans.

Newport’s commitment to liberty of conscience and religion provided a safe haven for early Quakers and the Society of Friends flourished. Their meeting house was expanded in 1705 and 1729 “for the conveniency of the women’s meeting.” Though Newport’s Quaker population declined greatly after the Revolution, with many Friends leaving for the west to escape war and the “dissipations” of urban life, the New England Yearly Meeting continued to grow. The building was enlarged again in 1807, at which time the roof was altered, and again in 1857 and 1867when additions were made to the front and rear of the building.

In 1905, the New England Yearly Meeting was transferred from Newport to Providence. The meeting house was sold in 1922 to the Community Center Association and was used as a recreation center. It became an important meeting place for the African-American community, and it was here that the Martin Luther King Center, a social service agency now located nearby on Dr. Marcus Wheatland Boulevard, was founded. By the late 1960s, however, it had fallen into disrepair, and it was known locally as the “Old Rec” in a sad play on words. In 1967, the Wright family of Jamestown purchased and restored the property under the guidance of architect Orin M. Bullock. The restored building was presented to the Newport Historical Society by Mrs. Sydney I. Wright. The Historical Society continues to maintain the building as an historic site dedicated to preserving and interpreting the history of the Quakers.

Topics and series. This historical marker is listed in these topic lists: Churches & Religion • Settlements & Settlers • War, US Revolutionary. In addition, it is included in the Quakerism ⛪ series list. A significant historical year for this entry is 1639.