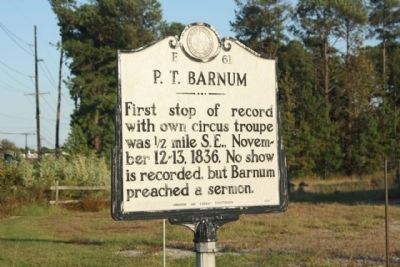 By Mike Stroud, October 14, 2011
1. P.T. Barnum Marker
Inscription.
P.T. Barnum. . First stop of record with own circus troupe was 1/2 mile S.E., November 12-13, 1836. No show is recorded, but Barnum preached a sermon. . This historical marker was erected in 1956 by North Carolina Office of Archives & History — Department of Cultural Resources. It is in Rocky Mount in Nash County North Carolina 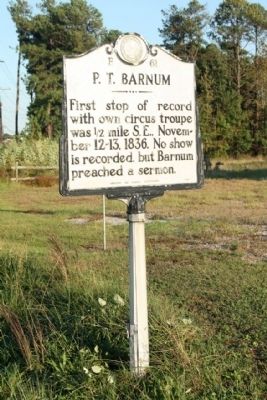 By Mike Stroud, October 14, 2011
2. P.T. Barnum Marker
In November 1836, P.T. Barnum dazzled the people of Rocky Mount Falls, North Carolina. However, it was with
the words of a sermon, not with the performance troupe
that the “World’s Greatest Showman” captivated his audience. Barnum had recently separated from his associate Aaron Turner’s act which had been touring in Maryland, Virginia, and North Carolina. To form his own circus troupe he took with him Signor Vivalli, an Italian juggler and tight ropewalker, James Sanford, a black singer and dancer, several musicians, horses, wagons, and a small canvas tent. Their first stop together was in Nash County. Barnum stayed the night of November 12 at Rocky Mount Fall’s Stage Coach Inn. In his autobiography, Barnum wrote that, the next morning, he accompanied the landlord to the Baptist church. Before entering the church, Barnum noticed a grove with a stand and benches. Desiring to speak to the congregation, Barnum was permitted by the preacher to announce that he would speak for a half an hour after the service. Approximately 300 people stayed to listen to Barnum preach. About the sermon he delivered Barnum wrote, “I told them I was not a preacher and had very little experience in public speaking; but I felt a deep interest in matters of morality and religion and would attempt, in a plain way, to set before them the duties and privileges of man.” 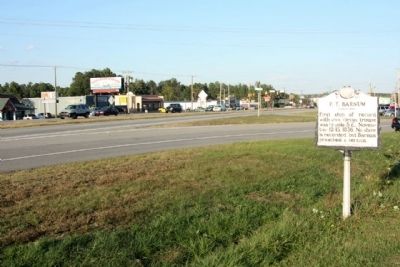 By Mike Stroud, October 14, 2011
3. P.T. Barnum Marker. looking north at N Wesleyan Blvd. (US 301 Bypass) and Airport Road
Barnum and his traveling show performed together until June 1838 before moving on to bigger and grander
things. In 1841, he purchased Scudder’s American Museum on Broadway in New York City. The museum, which showcased all sorts of oddities and curiosities, led to Barnum’s fortune. In 1881, he combined his P. T. Barnum's Grand Traveling Museum, Menagerie, Caravan, and Circus with James Bailey and James Hutchinson, resulting in "P.T. Barnum's Greatest Show on Earth, and the Great London Circus, Sanger's Royal British Menagerie and The Grand International Allied Shows United." In 1888, the "Barnum & Bailey Greatest
Show on Earth" first toured America. Among Barnum’s most famous acts over the years were the midget General Tom Thumb; Jenny Lind, the “Swedish Nightingale” soprano; and the Siamese twins, Eng and Chang. (North Carolina Office of Archives & History) 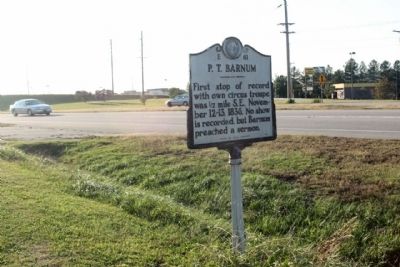 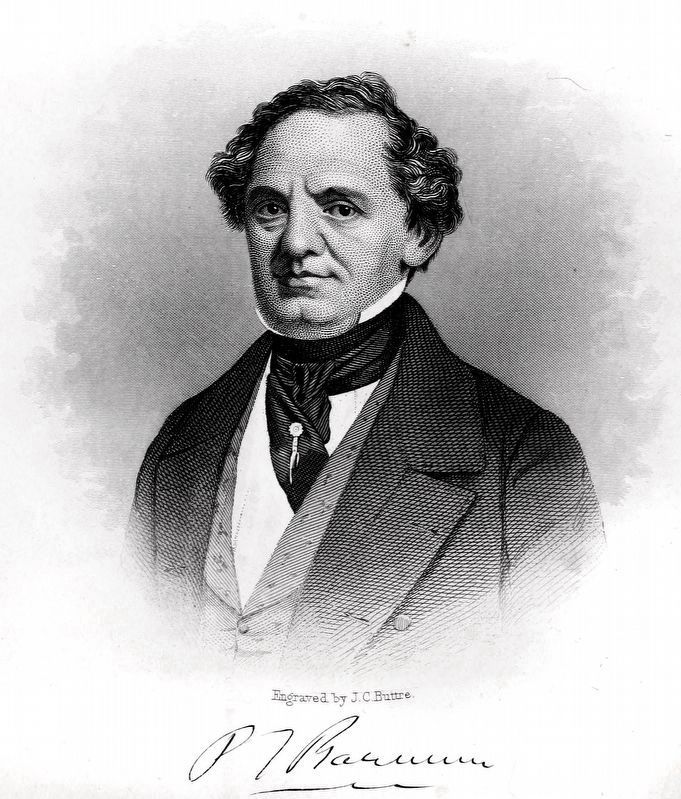