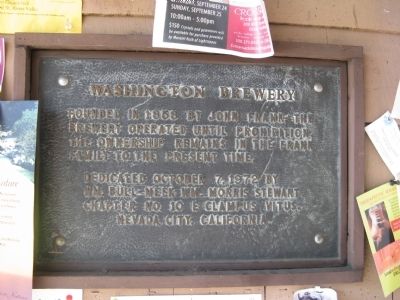 By Syd Whittle, October 9, 2011
1. Washington Brewery Marker
Inscription.
Washington Brewery. . Founded in 1858 by John Frank the brewery operated until prohibition. The ownership remains in the Frank family to the present time. . This historical marker was erected in 1972 by Wm. Bull Meek-Wm. Morris Stewart Chapter 10, E Clampus Vitus, Nevada City, California. It is in Grass Valley in Nevada County California

Founded in 1858 by John Frank the brewery operated until prohibition. The ownership remains in the Frank family to the present time.

Topics and series. This historical marker is listed in this topic list: Industry & Commerce. In addition, it is included in the E Clampus Vitus series list. A significant historical year for this entry is 1858.

Location. 39° 13.161′ N, 121° 3.694′ W. Marker is in Grass Valley, California, in Nevada County. Marker is on 114 East Main Street east of North Auburn Street, on the right when traveling west. Marker is mounted on the left side-wall at the front entrance. Touch for map. Marker is in this post office area: Grass Valley CA 95945, United States of America. Touch for directions. 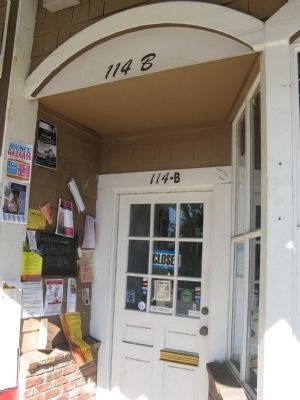 By Syd Whittle, October 9, 2011
2. Washington Brewery Marker
The marker is mounted on the left surrounded by notices and advertisements.

Regarding Washington Brewery. From the Walking Tour of Historic Grass Valley brochure:
Built by John Frank and David Binkelmann in 1858, according to E Clampus Vitus; or in 1862, according to other sources. Binkelmann had begun the Grass Valley Brewery in 1856 on North Auburn Street. The brewery was closed by Prohibition and later reopened as the Washington Tavern.

Also see . . .  Walking Tour of Historic Grass Valley. Published by the Grass Valley Chamber of Commerce, this brochure highlights many of the historical sites and buildings in Grass Valley. The Washington Brewery Building is Stop #29. (Submitted on October 24, 2011.) 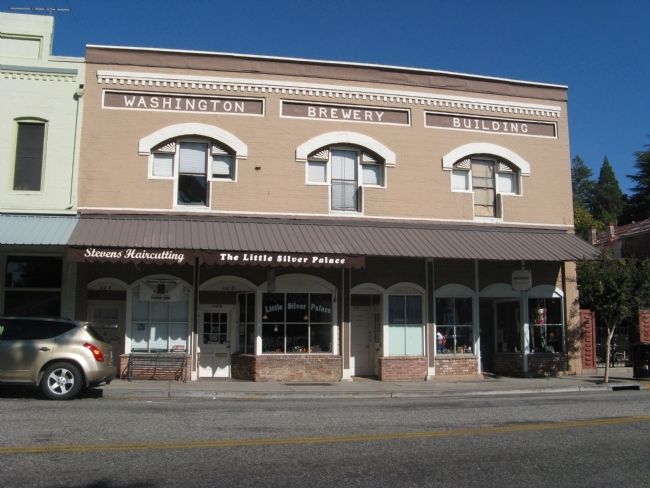