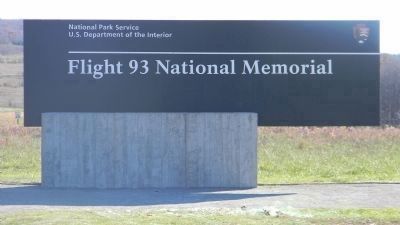 On the morning of September 11, 2001, al-Qaeda terrorists hijack four commercial U.S. airliners that are departing from East Coast airports. The terrorists fly two jet airliners into the World Trade Center’s Twin Towers in New York City and a third aircraft into the Pentagon in Arlington, Virginia. A fourth aircraft, United Airlines Flight 93, crashes into an open field near rural Shanksville, Pennsylvania, killing all on board. The four aircraft strikes kill nearly 3,000 people, the deadliest attack on American soil by any foreign nation or terrorist group.

Aboard Flight 93
Alerted to the events at the World Trade Center and the Pentagon, the forty unarmed passengers and crew of Flight 93 take quick and determined action. Their revolt prevents Flight 93 from reaching the terrorists’ intended target.
Evidence later reveals that the target is most likely the U.S. Capitol, where the Senate and House of Representatives are in session. Flight 93 crashes less than 20 minutes flying-time from Washington, D.C. 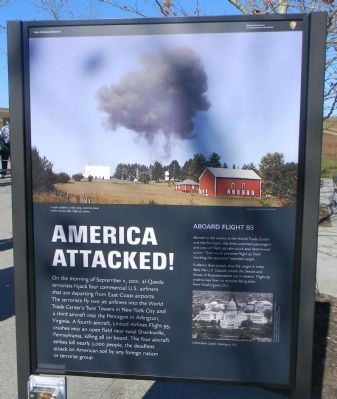 Click or scan to see
this page online
miles away, took this photo within minutes after Flight 93 crashes. Photo, courtesy of Valencia McClatchey.

The day begins with a cloudless, bright blue sky over the mid-Atlantic states. Seven crew members assigned to Flight 93 prepare for the early morning nonstop flight from Newark, New Jersey, to San Francisco, California. Thirty-three passengers are traveling for ordinary reasons. Four other passengers plan to hijack the aircraft.
The terrorists began planning their attack as early as 1999. Still, some factors are beyond their control. Three of four hijacked planes depart on schedule; however, Flight 93 is delayed more than 25 minutes due to heavy morning traffic.

America under Attack
Just four minutes after Flight 93 takes off, hijacked American Airlines Flight 11 strikes the North Tower of the World Trade Center in New York City. At 9:03 am, a second hijacked plane, a second hijacked plane, United Airlines Flight 175, hits the South Tower. After 46 minutes of routine flight, at about 9:28 am, the terrorists on board Flight 93 take over the cockpit. Air traffic controllers 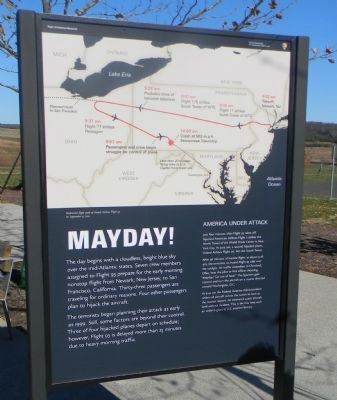 By Richard E. Miller, November 5, 2011
3. Flight 93 Marker Panel 2
in Cleveland, Ohio, hear the pilot or first officer shouting, “Mayday! Get out of here!” The hijackers gain control and turn the aircraft on a course directed toward Washington, D.C. At 9:42 am the Federal Aviation Administration orders all aircraft across the nation to land at the nearest airport. An estimated 4,500 aircraft land without incident. This is the first time such and order is given in U.S. aviation history.

Aboard Flight 93, one terrorist claims to have a bomb strapped to his waist. The crew and Passengers are forced to the back of the plane and ordered to be quiet. Using Airfones from the seat backs in the rear of the plane and cellphones, passengers and crew call their families, friends, and authorities to report the hijacking. They soon learn the shocking news that Flight 93 is part of a larger attack, including the news that a third plane, hijacked American Airlines Flight 77, crashed into the Pentagon at 9:37 am. This realization leads to a vote and a collective decision to fight back.

Fighting Back
In little more than 30 minutes, these ordinary airline passengers and crew members, strangers 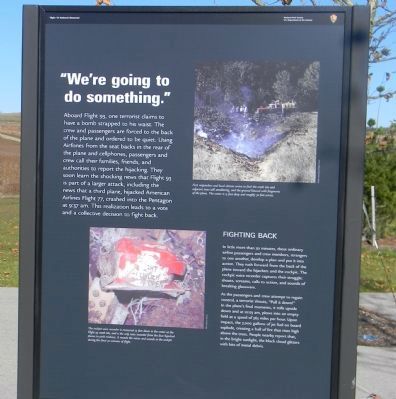 By Richard E. Miller, November 5, 2011
4. Flight 93 Marker Panel 3
to one another, develop a plan and put it into action. They rush forward from the back of the plane toward the hijackers and the cockpit. The cockpit voice recorder captures their struggle: shouts, screams, calls to action, and sounds of breaking glassware. As the passengers and crew attempt to regain control, a terrorist shouts, “Pull it down!” In the plane’s final moments, it rolls upside down and at 10:03 am, plows into an empty field at a speed of 563 miles per hour. Upon impact, the 7,000 gallons of jet fuel on board explode, creating a ball of fire that rises high above the trees. People nearby report that, in the bright sunlight, the black cloud glitters with bits of metal debris.

[Photo captions:]
First responders and local citizens arrive to find the crash site and adjacent trees still smoldering, and the ground littered with fragments of the plane. The crater is 15 feet deep and roughly 30 feet across.
(Photo, courtesy of Mark Stahl)

The cockpit voice recorder is recovered 25 feet down in the crater at the Flight 93 crash site, and is the only voice recorder from the four hijacked planes to yield evidence. It reveals the voices and sounds in the cockpit during the final 30 minutes of flight.
(FBI evidence photo.)

Panel 4:
The Crew and Passengers of Flight 93: 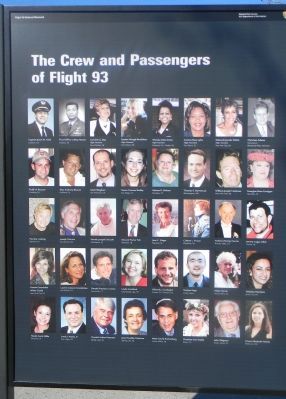 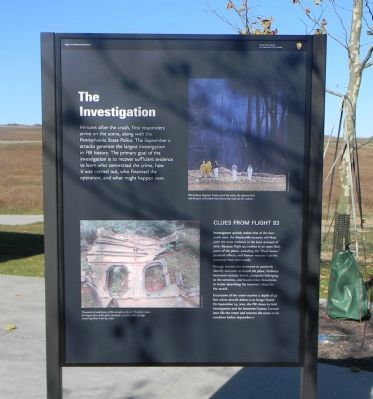 Minutes after the crash, first responders arrive on the scene, along with the Pennsylvania State Police. The September 11 attacks generate the largest investigation in FBI history. The primary goal of the investigation is to recover sufficient evidence to learn who committed the crime, how it was carried out, who financed the operation, and what might happen next.

Clues from Flight 93
Investigators quickly realize that of the four crash sites, the Shanksville location will likely yield the most evidence in the least amount of time. Because Flight 93 crashes in an open field, parts of the plane – including the “black boxes,” personal effects, and human remains – can be recovered here more easily.
Enough remains are recovered to positively identify everyone on board the plane. Evidence recovered includes knives, passports belonging to the terrorists, and handwritten documents in Arabic describing the terrorists’ plans for the attack.
Excavation of the crater reaches a depth 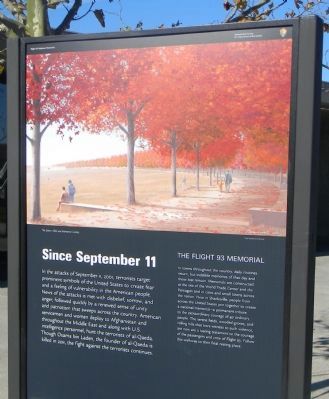 By Richard E. Miller, November 5, 2011
7. Flight 93 Marker Panel 6
of 40 feet where aircraft debris is no longer found. On September 24, 2001, the FBI closes its field investigation and the Somerset County Coroner later fills the crater and restores the scene to its condition before September 11.

[Photo Captions:]
FBI Evidence Response Teams search the crater, the adjacent field, and the grove of hemlock trees beyond the crash site for evidence. (Photo, courtesy of Dale Sparks)
Thousands of small pieces of the aircraft are found. This photo shows the largest piece of the plane recovered: a section of the fuselage measuring 6 feet by 7 feet. (FBI evidence photo)

Panel 6:
Since September 11th
The attacks on September 11, 2001, terrorists target prominent symbols of the United States to create fear and a feeling of vulnerability in the American people. News of the attacks is met with disbelief, sorrow, and anger, followed quickly by a renewed since of unity and patriotism that sweeps across the country. American servicemen and women deploy to Afghanistan and throughout the Middle East and along with U.S. intelligence personnel, hunt the terrorists of al-Qaeda. Though Osama bin Laden, the founder of al-Qaeda is killed in 2011, the fight against the terrorists continues.

The Flight 93 Memorial
In towns throughout the country, daily routines return, but indelible memories of 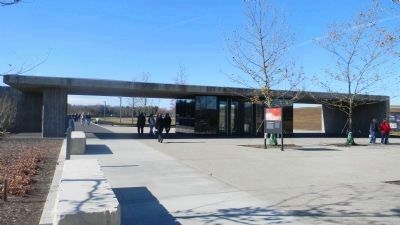 By Richard E. Miller, November 5, 2011
8. Visitors' center, Flight 93 National Memorial,
that day and those lost remain. Memorials are constructed at the site of the World Trade Center and the Pentagon and in cities and small towns across the nation. Here in Shanksville, people from across the United States join together to create a national memorial – a permanent tribute to the extraordinary courage of forty ordinary people. The serene fields, wooded groves and rolling hills that bore witness to such violence are now a lasting testament to the courage of the passengers and crew of Flight 93. Follow this walkway to their final resting place.

Erected 2011 by National Park Service, U.S. Department of the Interior.

Topics. This historical marker is listed in these topic lists: Air & Space • War, 2nd Iraq. A significant historical date for this entry is September 11, 1843.

Location. 40° 3.316′ N, 78° 54.349′ W. Marker is in Stonycreek Township, Pennsylvania, in Somerset County. Marker can be reached from Skyline Road (via Stauffer Road) one mile south of Lincoln Highway (U.S. 30). The Stauffler Road entrance to the Memorial site is off Lincoln Highway between the towns of Somerset and Bedford, Pennsylvania. The National Park Service visitor center parking area is about a mile south - 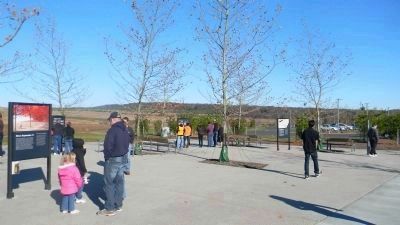 By Richard E. Miller, November 5, 2011
9. Flight 93 Marker panels on display in the courtyard at the National Memorial's main entrance
off Skyline Road at the end of Stauffler Road. Touch for map. Marker is in this post office area: Stoystown PA 15563, United States of America. Touch for directions. 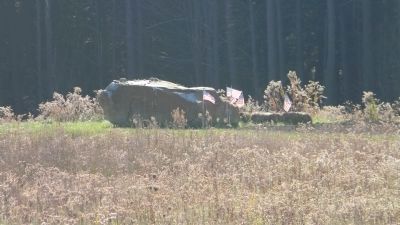 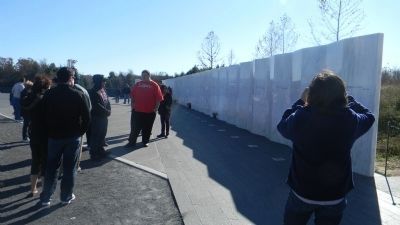 By Richard E. Miller, November 5, 2011
11. Flight 93 Memorial Wall - marking the course of the airliner over the crash site
- with the names of passengers and flight crewmembers on its individual panels. 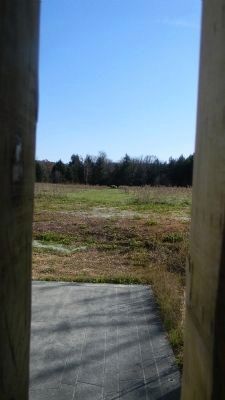 By Richard E. Miller, November 5, 2011
12. Viewing portal, south end of the Memorial wall
- the closet point for viewing the boulder at the impact site which remains off limits to visitors. 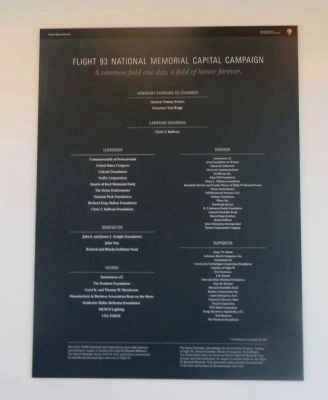 By Richard E. Miller, November 5, 2011
13. Contributor's Plaque at entrance to the Flight 93 Memorial
- names of major corporate and individual sponsors, benefactors, patrons, among other major supporters. 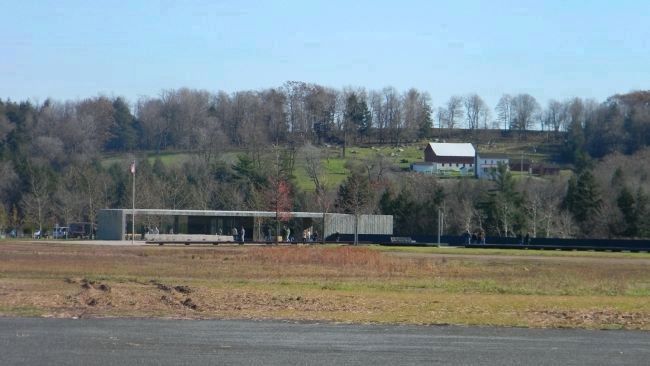