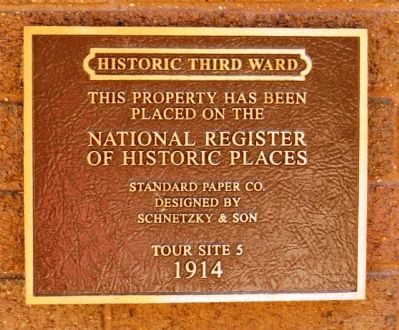 Location. 43° 2.063′ N, 87° 54.353′ W. Marker is in Milwaukee, Wisconsin, in Milwaukee County. Marker is on North Milwaukee Street (State Highway 32) 0.1 miles north of East Buffalo Street, on the right when traveling north. Touch for map. Marker is at or near this postal address: 316 N Milwaukee St, Milwaukee WI 53202, United States of America. Touch for directions. 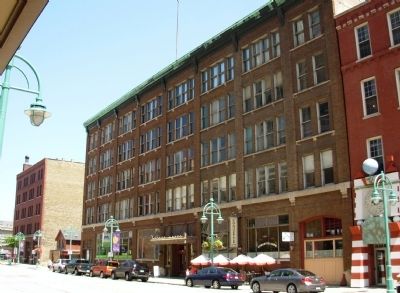 By Paul Fehrenbach, July 29, 2011
2. Standard Paper Co. Building
Marker is to the right of the front door.
distance of this marker); Kalvelage Wholesale Commission House (about 300 feet away, measured in a direct line); Baumbach Building (about 300 feet away); Broadway Produce Co. (about 400 feet away). Touch for a list and map of all markers in Milwaukee.

Regarding Standard Paper Co.. Architects Schnetzky and Son designed this warehouse in 1914 for the Standard Paper Co., suppliers of paper for most of the Midwest's early 20th Century newspapers. Renovated and renamed the Landmark Building in 1987, it is home to numerous personal and professional service offices as well as Coquette Cafe, a French bistro owned and operated by Sandy and Angie D'Amato. -Historic Third Ward Walking Tour brochure