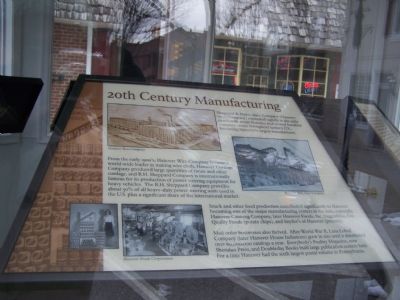 From the early 1900's, Hanover Wire Company became a world-wide leader in making wire cloth, Hanover Cordage Company produced large quantities of twine and other cordage, and R.H. Sheppard Company is internationally famous for its production of power steering equipment for heavy vehicles. The R.H. Sheppard Company provides about 50% of all heavy-duty power steering units used in the U.S. plus a significant share of the international market. 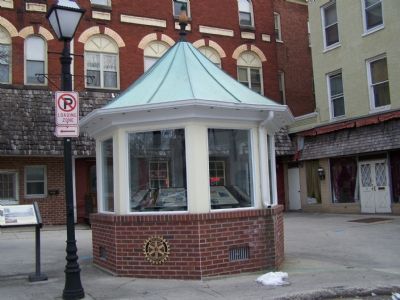 By Beverly Pfingsten, January 26, 2008
2. This and 7 other markers are located in this display kiosk.
magazine, now Sheridan Press, and Doubleday Books built large publication centers here. For a time Hanover had the sixth largest postal volume in Pennsylvania.

Location. 39° 48.032′ N, 76° 58.968′ W. Marker is in Hanover, Pennsylvania, in York County. Marker is at the intersection of Broadway and Carlisle St., on the left when traveling south on Broadway. Marker is on the SE corner of the town square with 7 other markers about the town of Hanover. Touch for map. Marker is in this post office area: Hanover PA 17331, United States of America. Touch for directions.