The Almshouse of the Society of Friends 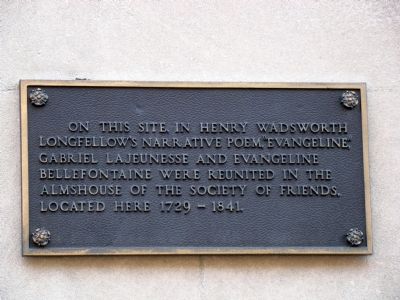 On this site in Henry Wadsworth Longfellow’s narrative poem, “Evangeline,” Gabriel LaJeunesse and Evangeline Bellefontaine were reunited in the almshouse of the Society of Friends, located here 1729–1841.

Topics and series. This historical marker is listed in these topic lists: Arts, Letters, Music • Charity & Public Work. In addition, it is included in the Quakerism series list. A significant historical year for this entry is 1841. 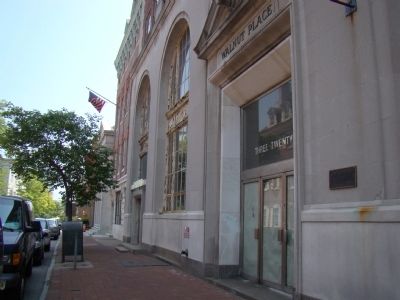 1. Evangeline, A Tale of Acadie. Wikipedia entry for Henry Wadsworth Longfellow’s poem. “The poem follows an Acadian girl named Evangeline and her search for her lost love Gabriel, set during the time of the Expulsion of the Acadians, the forced removal by the British between 1755 and 1763 of the Acadian people from present day Canadian Maritime provinces: Nova Scotia, New Brunswick, and Prince Edward Island (an area also known as Acadie).

The idea for the poem came from Longfellow's friend, Nathaniel Hawthorne. Longfellow used dactylic hexameter reminiscent of Greek and Latin classics, though the choice was criticized. It was published in 1847 and became Longfellow's most famous work in his lifetime. It remains one of his most popular and enduring works. The poem had a powerful effect in defining both Acadian history and identity in the nineteenth and twentieth century.” (Submitted on December 21, 2011.)

2. Link to the complete 1847 poem Evangeline.
(Excerpt)
Gayly the old man sang to the vibrant sound of his fiddle,
Tous les Bourgeois de Chartres, and Le Carillon de Dunkerque,
And anon with his wooden shoes beat time to the music.
Merrily, merrily whirled the wheels of the dizzying dances
Under the orchard-trees and down the path to the meadows;
Old folk and young together, and children mingled among them.
Fairest of all the maids was Evangeline, Benedict’s daughter!
Noblest of all the youths was Gabriel, son of the blacksmith!
. . .
(Excerpt)
Half-way down to the shore Evangeline waited in silence,
Not overcome with 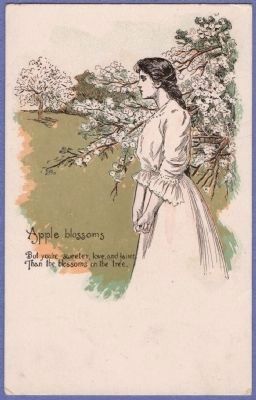 J. J. Prats Postcard Collection, 1903
3. Evangeline - Apple Blossoms Postcard
“But you're sweeter, love, and fairer, / Than the blossoms on the tree.” Copyright 1903 by Adolph Selige Pub. Co., St. Luis
grief, but strong in the hour of affliction —
Calmly and sadly waited, until the procession approached her,
And she beheld the face of Gabriel pale with emotion.
Tears then filled her eyes, and, eagerly running to meet him,
Clasped she his hands, and laid her head on his shoulder and whispered —
“Gabriel! be of good cheer! for if we love one another,
Nothing, in truth, can harm us, whatever mischances may happen!”
. . .
(Excerpt, Philadelphia almshouse scene)
Thus, on a Sabbath morn, through the streets, deserted and silent,
Wending her quiet way, she entered the door of the almshouse.
Sweet on the summer air was the odor of flowers in the garden;
And she paused on her way to gather the fairest among them,
That the dying once more might rejoice in their fragrance and beauty.
Then, as she mounted the stairs to the corridors, cooled by the east wind,
Distant and soft on her ear fell the chimes from the belfry of Christ Church,
While, intermingled with these, across the meadows were wafted
Sounds of psalms, that were sung by the Swedes in their church at Wicaco.
Soft as descending wings fell the calm of the hour on her spirit;
Something within her said — “At length thy trials are ended;”
And, with a light in her looks, she entered the chambers of sickness.
. . .
(Excerpt, Philadelphia almshouse scene)
Suddenly, as if arrested by fear or a feeling of wonder,
Still she stood with her colorless lips apart, while a shudder
Ran through her frame, and, forgotten, the flowerets

4. Evangeline
dropped from her fingers,
And from her eyes and cheeks the light and bloom of the morning.
Then there escaped from her lips a cry of such terrible anguish,
That the dying heard it, and started up from their pillows.
On the pallet before her was stretched the form of an old man.
Long, and thin, and gray were the locks that shaded his temples;
But, as he lay in the morning light, his face for a moment
Seemed to assume once more the forms of its earlier manhood;
So are wont to be changed the faces of those who are dying.
Hot and red on his lips still burned the flush of the fever,
As if life, like the Hebrew, with blood had besprinkled its portals,
That the Angel of Death might see the sign, and pass over,
Motionless, senseless, dying, he lay, and his spirit exhausted
Seemed to be sinking down to infinite depths in the darkness,
Darkness of slumber and death, forever sinking and sinking.
Then through those realms of shade, in multiplied reverberations,
Heard he that cry of pain, and through the hush that succeeded
Whispered a gentle voice, in accents tender and saint-like,
“Gabriel! O my beloved!” and died away into silence.
Then he beheld, in a dream, once more the home of his childhood;
Green Acadian meadows, with sylvan rivers among them,
Village, and mountain, and woodlands; and, walking under their shadow,
As in the days of her youth, Evangeline rose in his vision.
Tears came into his eyes; and as slowly he lifted his eyelids,
Vanished the vision away, but Evangeline knelt by his bedside.
Vainly 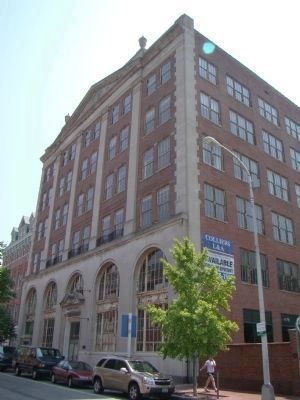 Photographed By J. J. Prats, May 14, 2010
5. Walnut Place Building, Philadelphia
On the Site of the Friends’ Almshouse
Marker can be seen to the right of the entrance doors.
he strove to whisper her name, for the accents unuttered
Died on his lips, and their motion revealed what his tongue would have spoken.
Vainly he strove to rise; and Evangeline, kneeling beside him,
Kissed his dying lips, and laid his head on her bosom
Sweet was the light of his eyes; but it suddenly sank into darkness,
As when a lamp is blown out by a gust of wind at a casement.

All was ended now, the hope, and the fear, and the sorrow,
All the aching of heart, the restless, unsatisfied longing,
All the dull, deep pain, and constant anguish of patience!
And, as she pressed once more the lifeless head to her bosom,
Meekly she bowed her own, and murmured, “Father, I thank thee!”
. . .
(Submitted on December 21, 2011.)

Additional commentary.
1. About the Friends’ Almshouse
Excerpt from the the 1890 book History and Reminiscences of the Philadelphia Almshouse and Philadelphia Hospital, Volume 1, by D. Hayes Agnew, M.D., et al.

The Friends' Almshouse of Philadelphia, which ante-dated by a number of years the first institution of the kind under the municipality, is described by Scharf and Westcott.

“. . .In the meantime, however, before the councils acted finally, the Friends had founded their own almshouse. It was established in a small house on the south side of Walnut street, between Third and Fourth streets, where, in 1729, the ancient, well-known building, called the Friends’ Almshouse, was built, 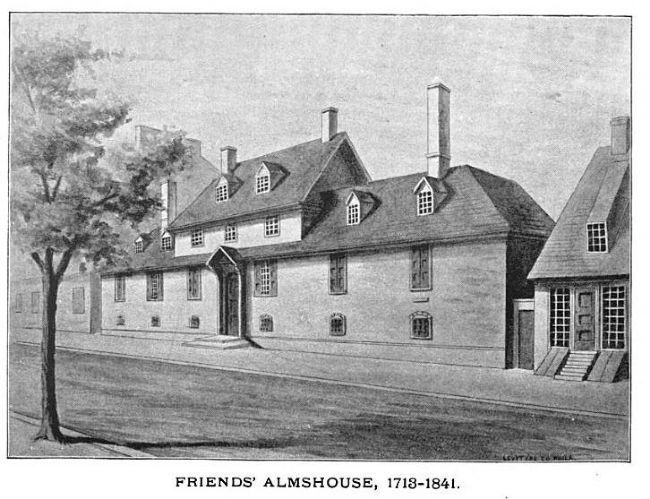