Site of First Ski Tow in the United States 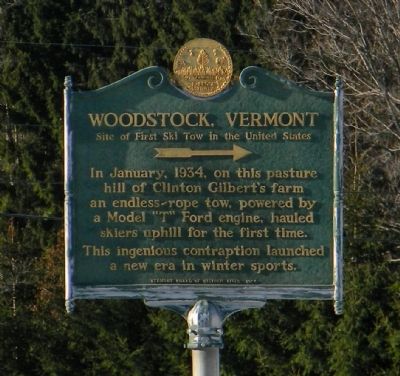 In January, 1934, on this pasture hill of Clinton Gilbert’s farm an endless-rope tow, powered by a Model “T” Ford engine, hauled skiers uphill for the first time.
This ingenious contraption launched a new era in winter sports.

Erected 1984 by Vermont Board of Historic Sites.

Topics. This historical marker is listed in this topic list: Sports. A significant historical month for this entry is January 1934.

Location. 43° 38.824′ N, 72° 32.436′ W. Marker is near Woodstock, Vermont, in Windsor County. Marker is on Barnard Road (Vermont Route 12) one mile east of Pomfret Road, on the right when traveling west. Touch for map. Marker is in this post office area: Woodstock VT 05091, United States of America. Touch for directions. 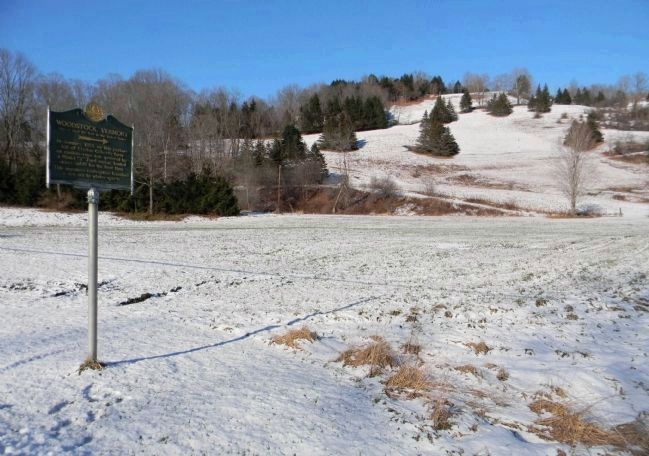 Photographed By Paul Crumlish, December 24, 2011
2. Wide-View of the Site of First Ski Tow in the United States Marker
Looking toward Gilbert's Hill, the site of the first ski tow. Located just outside of the village of Woodstock, it is not far today's ski resorts in Killington and Stowe.

Click or scan to see
this page online
(approx. 1.9 miles away); Hiram Powers (approx. 2.2 miles away). Touch for a list and map of all markers in Woodstock.