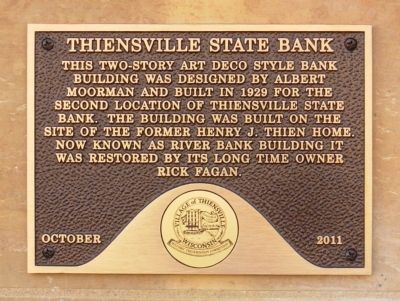 This two-story art deco style bank building was designed by Albert Moorman and built in 1929 for the second location of the Thiensville State Bank. The building was built on the site of the former Henry J. Thien home. Now known as River Bank Building it was restored by its long time owner Rick Fagan.
October 2011

Topics and series. This historical marker is listed in this topic list: Notable Buildings. In addition, it is included in the Art Deco series list. A significant historical month for this entry is October 2011. 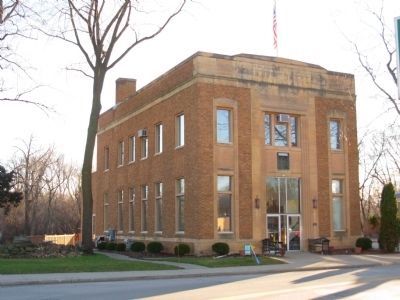 Click or scan to see
this page online
marker); Village Hall & Fire House 1914 (within shouting distance of this marker); The Commercial House (about 300 feet away, measured in a direct line); Oscar Bublitz Store 1920 (about 300 feet away); Maas-Bublitz Residence (about 300 feet away); Thiensville’s First General Store (about 400 feet away). Touch for a list and map of all markers in Thiensville.
Credits. This page was last revised on June 16, 2016. It was originally submitted on December 27, 2011, by Paul Fehrenbach of Germantown, Wisconsin. This page has been viewed 451 times since then. Photos:   1, 2. submitted on December 27, 2011, by Paul Fehrenbach of Germantown, Wisconsin. • Bernard Fisher was the editor who published this page.
Share this page.