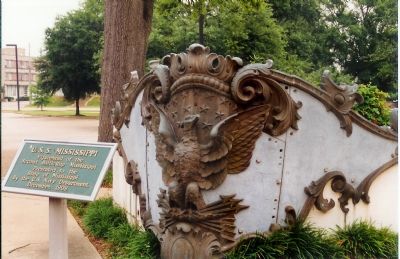 Figurehead of the
Second Battleship Mississippi
Presented to the
State of Mississippi
By the U.S. Navy Department
December 1909 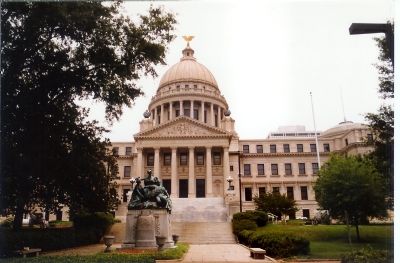 By Mike Stroud, May 1998
2. Mississippi Capitol Building in Jackson
This is the south grounds of the capitol. The prominent statue in this picture is the Confederate Women's Memorial. Behind the camera is a replica of the Liberty Bell.
. The Dictionary of American Fighting Ships entry for the second USS Mississippi (BB-23). The lead ship of her class, she saw action before World War I, was sold to Greece in 1914 (renamed Kilkis), and sunk in the early days of World War II. (Submitted on February 4, 2008, by Mike Stroud of Bluffton, South Carolina.)

4. Mississippi State Capitol. The state capitol, home to the figurehead and marker shown on this page, is the third capitol building built in the capital city of Jackson. It is designated a Mississippi landmark building and listed in the National Register of Historic Places. (Submitted on February 4, 2008, by Mike Stroud of Bluffton, South Carolina.) 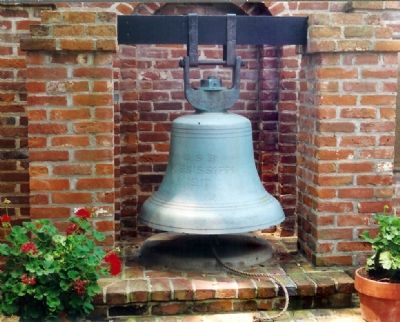 By Mike Stroud, May 1998
3. The U.S.S. Mississippi Bell
Used on three ships named for the state, it was donated to Rosalie Mansion and its owners, the Daughters of the American Revolution. It is proudly displayed in the gardens at Rosalie Mansion, on the site of Fort Rosalie overlooking the Mississippi River. Visitors are allowed to ring the bell with the attached pull rope.
More. Search the internet for U.S.S. Mississippi.