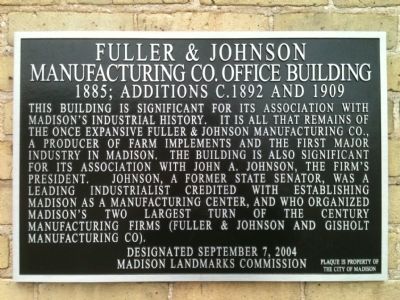 This building is significant for its association with Madison's industrial history. It is all that remains of the once expansive Fuller & Johnson Manufacturing Co., a producer of farm implements and the first major industry in Madison. The building is also significant for its association with John A. Johnson, the firm's president. Johnson, a former state senator, was a leading industrialist credited with establishing Madison as a manufacturing center, and who organized Madison's two largest turn of the century manufacturing firms (Fuller & Johnson and Gisholt Manufacturing Co).

Topics and series. This historical marker is listed in this topic list: Industry & Commerce. In addition, it is included in the Wisconsin, Madison Landmarks Commission series list. A significant historical date for this entry is September 7, 1751.

Photographed By William J. Toman, February 9, 2012
2. Fuller & Johnson Manufacturing Co. Office Building Marker
The original, 1885 building is the hipped-roof, two-story structure in the middle, with the one-story 1892 addition on the right. The two-story, flat-roofed 1909 addition is on the left. The marker is in the middle of this portion of the building, just visible behind the tree.

Regarding Fuller & Johnson Manufacturing Co. Office Building. According to the Madison Landmarks Commission, "This relatively small office building is all that remains intact of the once sprawling Fuller & Johnson Manufacturing Company. It was built largely in an industrial vernacular mode but features a classically styled main entrance. Most of the former complex was located across Dickinson St. from this site. One of its founders, John A. Johnson, also started the Gisholt Machine Co. on E. Washington Ave., and was a powerful catalyst for turning Madison into an important manufacturing center in the 1880s."

Photographed By William J. Toman, February 2, 2012
3. Fuller & Johnson Manufacturing Co. Office Building
This is the back of the building, with the three phases of construction again clearly visible.
Click here for a list of markers that are related to this marker. These are markers that mention John A. Johnson. The page for the first one includes a photo of the nearby gravestone of his parents, which mentions their hometown of Gisholt.