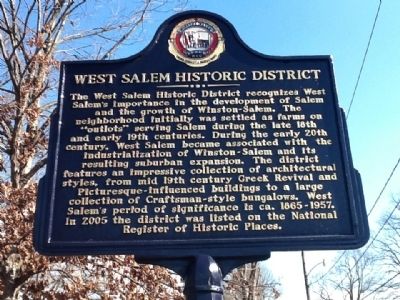 The West Salem Historic District recognizes West Salem's importance in the development of Salem and the growth of Winston-Salem. The neighborhood initially was settled as farms on "outlots" serving Salem during the late 18th and early 19th centuries. During the early 20th century, West Salem became associated with the industrialization of Winston-Salem and its resulting suburban expansion. The district features an impressive collection of architectural styles, from mid 19th century Greek Revival and Picturesque-influenced buildings to a large collection of Craftsman-style bungalows. West Salem's period of significance is ca. 1865-1857. In 2005 the district was listed on the National Register of Historical Places.

Topics. This historical marker is listed in this topic list: Industry & Commerce. A significant historical year for this entry is 2005.

Location. 36° 4.96′ N, 80° 15.03′ W. Marker is in Winston-Salem, North Carolina, in Forsyth County. Marker is at the intersection of Granville Street and Walnut Street and Washington 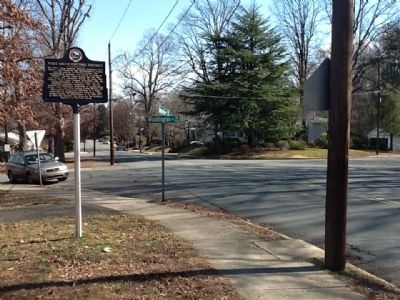 Click or scan to see
this page online
Street, on the left when traveling south on Granville Street. Touch for map. Marker is in this post office area: Winston Salem NC 27101, United States of America. Touch for directions. 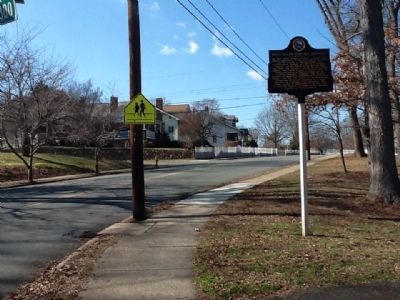