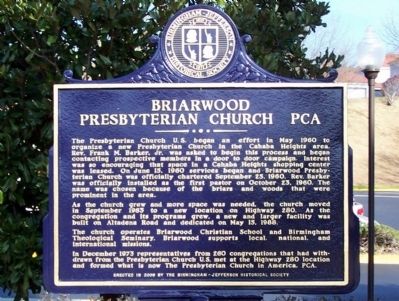 The Presbyterian Church U.S. began an effort in May 1960 to organize a new Presbyterian Church in the Cahaba Heights area. Rev. Frank M. Barker, Jr. was asked to begin the process and began contacting prospective members in a door to door campaign. Interest was so encouraging that space in a Cahaba Heights shopping center was leased. On June 15, 1960 services began and Briarwood Presbyterian Church was officially chartered September 25,1960. Rev. Barker was officially installed as the first pastor on October 23, 1960. The name was chosen because of the briars and woods that were prominent in the area. As the church grew and more space was needed the church moved in September 1963 to a new location on Highway 280. As the congregation and its programs grew, a new and larger facility was built on Altadena Road and dedicated on May 5, 1988. The church operates Briarwood Christian School and Birmingham Theological Seminary. Briarwood supports local, national, and international missions. In December 1973 representatives from 260 congregations that had withdrawn from the Presbyterian Church U.S. met at the Highway 280 location and formed what is 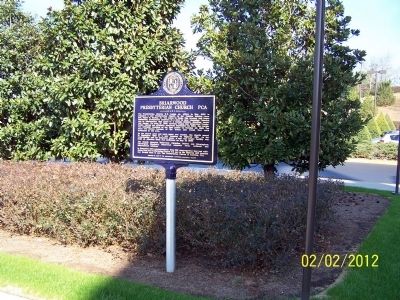 Click or scan to see
this page online
now The Presbyterian Church in America, PCA.

Topics. This historical marker is listed in this topic list: Churches & Religion. A significant historical month for this entry is May 1960.

Location. 33° 25.037′ N, 86° 45.604′ W. Marker is in Hoover, Alabama, in Jefferson County. Marker can be reached from Briarwood Way. The marker is located in front of the church sanctuary. Touch for map. Marker is at or near this postal address: 2200 Briarwood Way, Birmingham AL 35243, United States of America. Touch for directions.